Discovering The United Kingdom: 15 Places You Must Visit

The United Kingdom or the UK is the conglomeration of four islands, namely England, Scotland, Wales, and Northern Ireland. The mountain ranges have surrounded the United Kingdom in the north and west. These regions are full of beautiful valleys and small villages, whereas Scotland and the northwest part of England have some of the most picturesque lakes or lochs. The geographical diversity makes the United Kingdom a significant tourist attraction.

The UK is a very tourist-friendly place in terms of cost. From dorms to public transportation, there are several options for someone who is on a tight budget. What makes the United Kingdom unique is extensive public transportation systems like buses, trains, and ferries. The extensive railway and bus network connects every region and city. The subway in London makes the exploration of the town even more accessible. The best time to visit the UK is in spring (March-June) and autumn (September-November) when the weather remains warm and dry.

However, the weather does not get uncomfortable during summer or winter. Winter in the UK can also be very enjoyable.

It is fair to be confused about what to see and what not to see when traveling a vast region. Well, I am here to help you find out the top 15 UK tourist places to visit on your vacation: 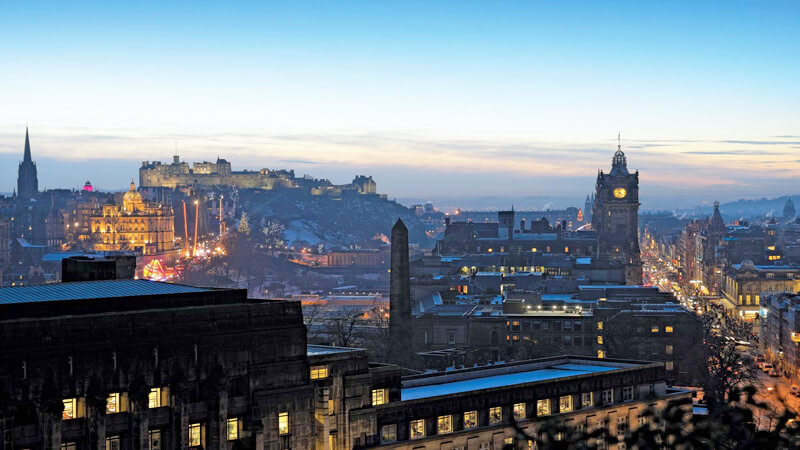 The capital of Scotland, Edinburgh, is one of the most popular destinations among tourists for its gorgeous Georgian neighborhoods and multiple sightseeing opportunities. Edinburgh Castle is the most famous among those sightseeing opportunities. In Edinburgh, other places to visit are the Royal Mile, National Museum of Scotland, Royal Botanic Garden, and Scottish National Gallery & Portrait Gallery.

You can also spend your days hiking Arthur's Seat in Holyrood Park or the SailsburyCarg.

Princes Street, at the heart of New Town, is full of vibrant shops and gardens. The Princes Mall is very popular among shopaholics. Edinburgh also hosts the Edinburgh International Book Fair and the Edinburgh Fringe Festival, the most prominent art festival globally. 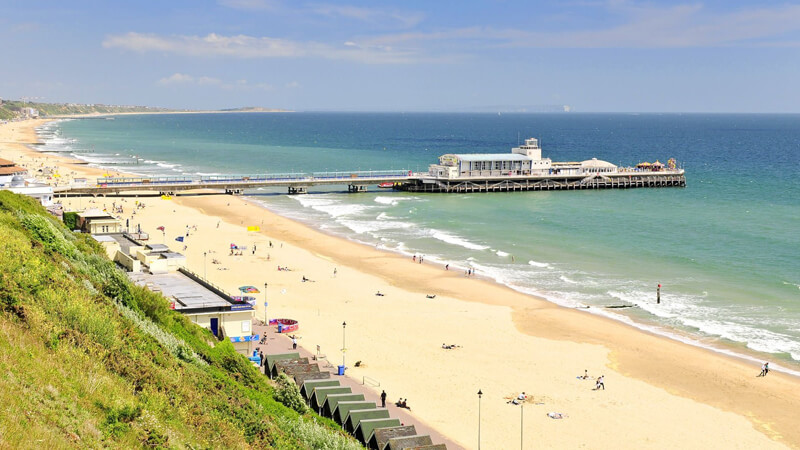 The Victorian charm of Bournemouth makes it one of the best places to visit in the UK with family. The seven miles coastline of this seaside town has four beaches. You cannot miss Bournemouth Beach while visiting this resort. The colorful gardens and parks make this beautiful beach town even more attractive. Low Gardens is the perfect place to have a walk with your loved ones. During August, the whole park is decorated with tea lights to celebrate a tradition named Candlelight Nights.

Bournemouth Pier attracts a fair share of tourists every year. However, it would be best to visit Hengistbury Head Beach, Hengistbury Head Visitor Centre, Oceanarium, and Russell-Cotes Art Gallery and Museum. And, if you love shopping, you must visit Bournemouth Arcade. 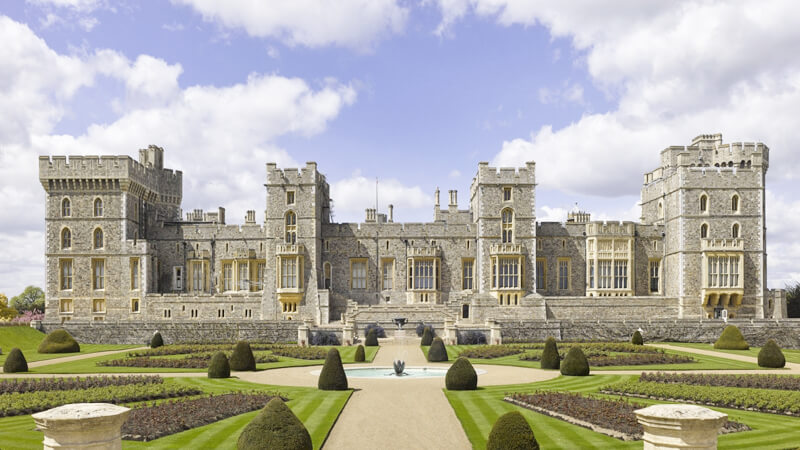 A short train ride from the city of London can land you at the historic town of Windsor. Windsor Castle makes this place worth visiting. Windsor Castle is one of the official residences of the British Royal family. The State Apartments containing magnificent dining halls and wall paintings are the highlights of this castle. You can also visit St. George's Chapel and Great Park.

Windsor Castle has other attractive places to visit like Frogmore Estate, Ascot Racecourse, and Eton College. From mid-September to early October, Windsor has been celebrating the Windsor Festival since 1969. The theatrical productions at Theatre Royal are bound to have a magical effect on you. 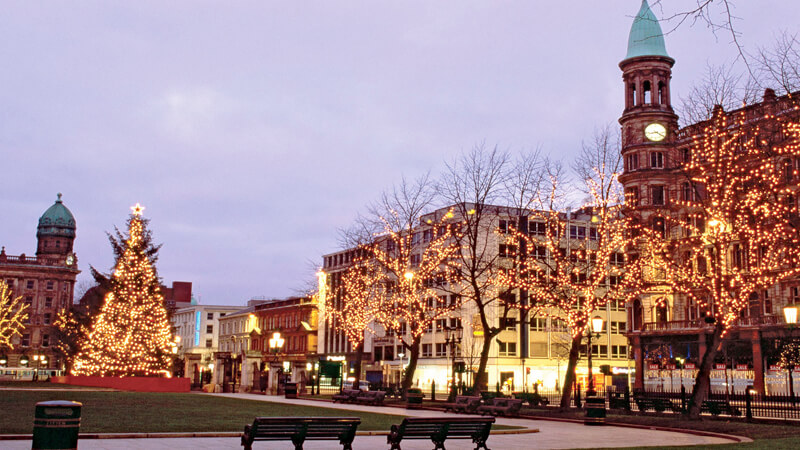 Apart from being the capital city of Northern Ireland, Belfast has another unique identity. Belfast is the birthplace of the unfortunate cruise ship Titanic. Titanic Belfast is a landmark in this city which is the place where the Titanic was built. Therefore, it is considered as a tribute to Titanic and Belfast's history. In addition, it organizes several exhibitions to showcase the troubling history of the town.

The Waterfront Hall offers visitors a panoramic view over River Lagan. The Ulster Museum is another place where you can learn about the history of this maritime town. The Botanic Garden allows you to have a picnic which your friends and family. You can also have a unique shopping experience at Victoria and Donegal Squares. Recently, this town is gaining popularity among tourists and is one of the best places to visit in the UK with friends. 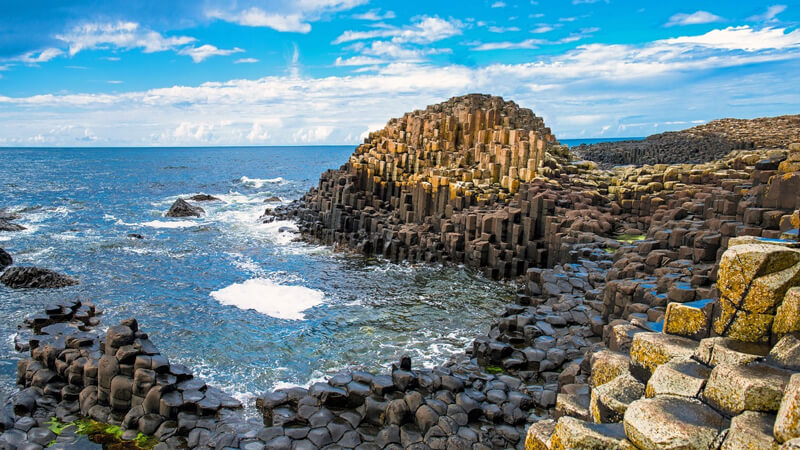 Giant's Causeway is located in the coastal region of Northern Ireland and is a UNESCO World Heritage Site. The mysterious coastline is made of basalt columns which are the wonders of nature. You can enjoy walking along the coastal trail on the columns. Giant's Causeway offers three trails: the Blue Train, the Red Trail, and the Runkerry Trail. You can also try the fully guided 5-mile cliff-top hike from the Dunseverick Castle along the beautiful coastline.

The National Trust manages this site, and you can make bookings to visit this site from them. They also offer a bus ride along the coastline so that you can enjoy the magnificent views. Giant's Causeway Cafe is your address if you want to munch on some snacks. Their apple and blackcurrant flapjacks are a must-try. 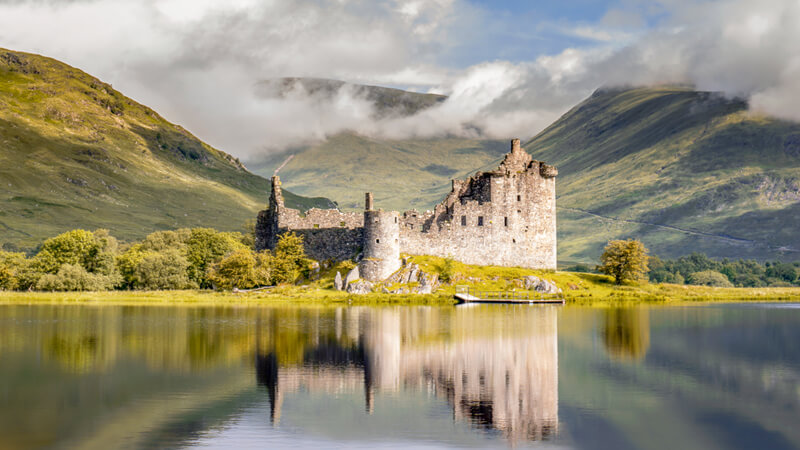 A vacation in Scotland demands a visit to Scottish Highlands. With high mountains, lochs, and commercial forests, this place has become one of Scotland's most famous tourist attractions. Loch Ness is at the heart of the Scottish Highlands. This region is perfect for outdoor activities like hiking. You can try hiking in Cairngorms National Park or Trossachs National Park. The major highlights include Glencoe, Isle of Skye, Eilean Donan Castle, Loch Lomond, and Loch Ness.

Scottish Highlands is where the Harry Potter movies have been filmed. If you know the bridge which the Hogwarts Express crosses to reach the school, you will recognize Glenfinnan Viaduct. Likewise, the Jacobite Steam Engine will remind you of the Hogwarts Express. 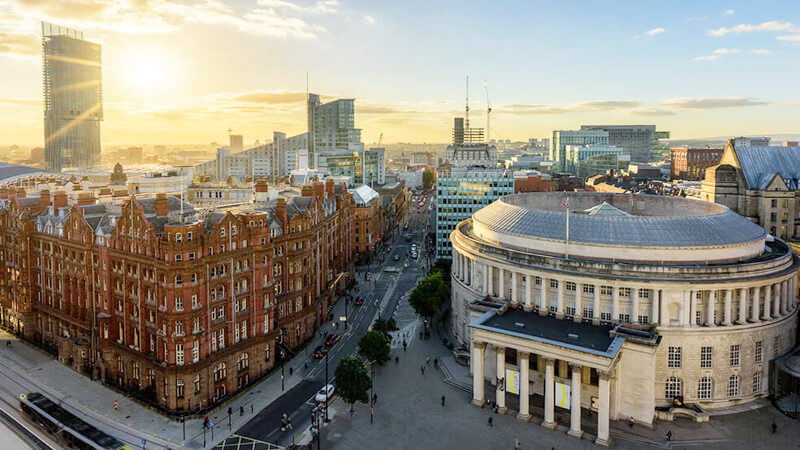 Located in northern England, Manchester is often called the cultural capital of Lancashire. However, Castlefield is the major attraction in Manchester. This heritage park has well-preserved Victorian buildings, canals, and Roman ruins.

The Chetham's Library in Manchester is England's oldest library, with over 100,000 books. St. Anne's Square, the Royal Exchange, and Bolton Arcade are the most popular shopping destinations in Manchester. 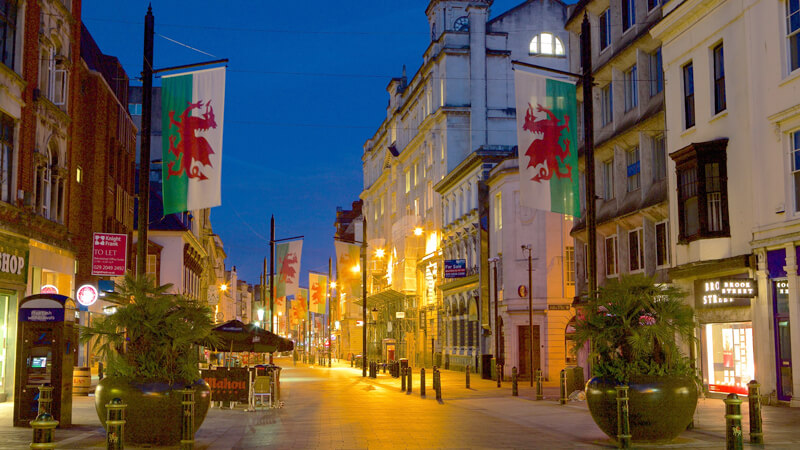 If you are on a trip to Wales, Cardiff must be on the visit list. Cardiff Castle will remind you of the city's historical past and significance. The city center houses several Victorian arcades famous for the shopping experiences they offer. The Royal Arcade, High Street Arcade, and Castle Arcade are some of the busiest arcades. Cardiff Bay and Roath Park are the best options if you are looking for some outdoor activities. 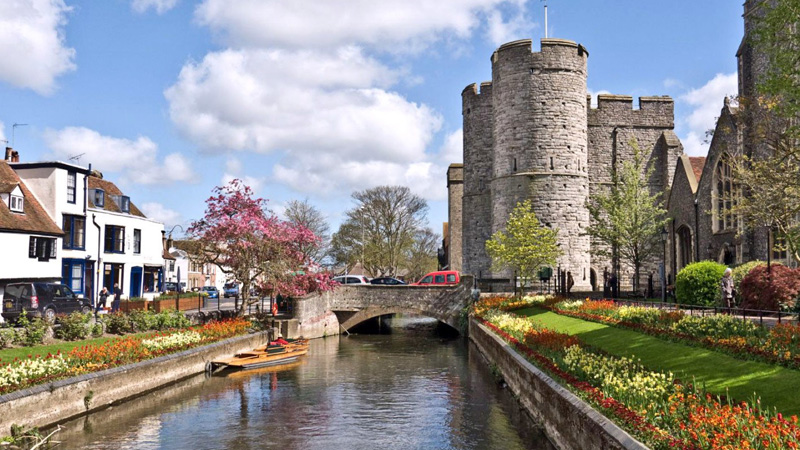 Canterbury is one of the most beautiful cities in England's south-eastern region and is considered a heritage city. It is the home of the Archbishop of Canterbury, who is the head of the Anglican Church. St. Augustine's Abbey is the burial place of St. Augustine. Canterbury Roman Museum is where you can learn about the Roman history of the city. 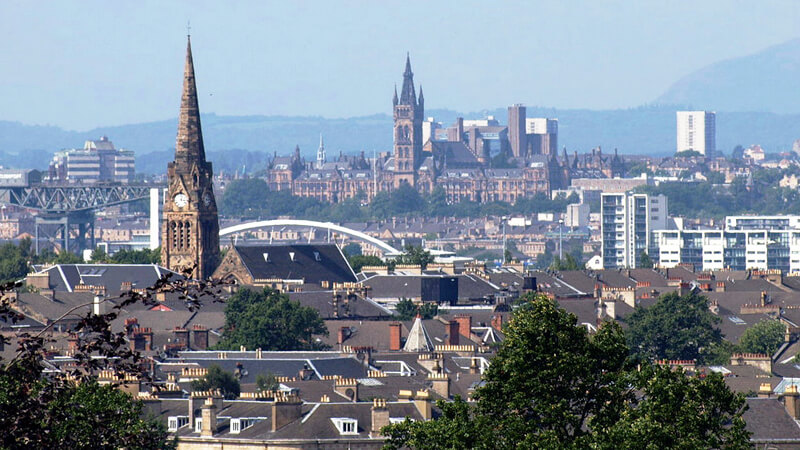 The city of Glasgow, located on the banks of River Clyde, is one of the cultural centers of Scotland. This city has several museums, art galleries, and auditoriums. With landmarks like the Theatre Royal and the Concert Hall, Glasgow has earned the reputation of Scotland's music capital. Celtic Connections Music Festival and Gourock Highland Games are two of the most famous festivals in Glasgow.

Glasgow School of Art, Kelvingrove Art Gallery and Museum, Hunterian Museum and Art Gallery, and Gallery of Modern Art are the perfect destinations for art lovers. Glasgow Cathedral, the most significant historical landmark in the city, offers guided tours free of cost. Glasgow also has another unique museum dedicated to bagpipes, the National Piping Centre and Piping Museum. City's George Square is lined up with beautiful cafes and designer boutiques. 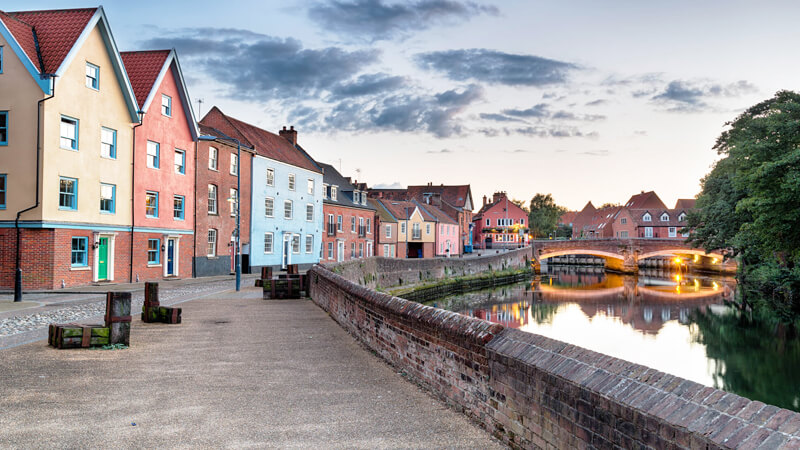 If you want to experience some overwhelming sunsets, quaint coastal charm, and cozy pubs, then you must visit the region of Norfolk. Wells-next-the-Sea houses traditional beach huts that are perfect for a picnic and other outdoor fun activities. Blakeney Point is a salt marsh where hundreds of seals busk under the sun. You can also go on exploring the picture-perfect villages like Blakeney, Stiffkey, Wells-next-the-sea, and Clay-next-the-Sea.

Cromer Pier is a 151 meters long pier over the North Sea. It also has the Pavilion Theatre where you can enjoy an end-of-pier show. The Gunton Arms, an authentic pub, is famous for serving local delicacies. 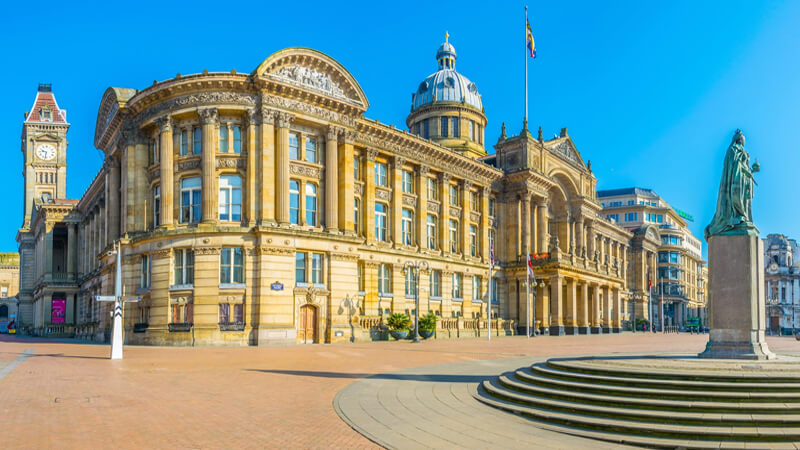 The region of the West Midlands has England's second-largest city, Birmingham. This city is famous for its canals and has more canals than Venice. The trenches owe their existence to the industrial revolution in the city. These canals can be best enjoyed through boat rides. Birmingham also hosts the second-largest St. Patrick's Day Parade in Entire Europe.

You can explore the City Centre on foot, where you will find Victorian marvels like Town Hall. Balti Triangle near City Centre has a concentration of places which serve dishes from India, Pakistan, and Bangladesh. The Birmingham Museum and Art Gallery and Thinktank, Birmingham Science Museum are also popular among the tourists. You can also explore Coventry if you love shopping and dining. 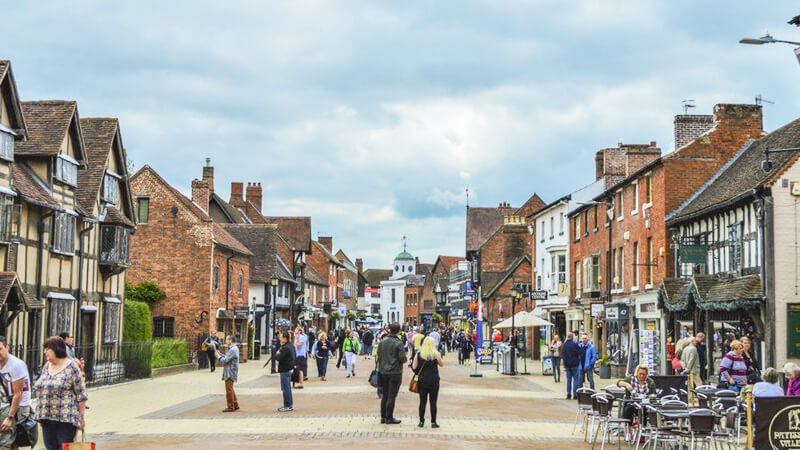 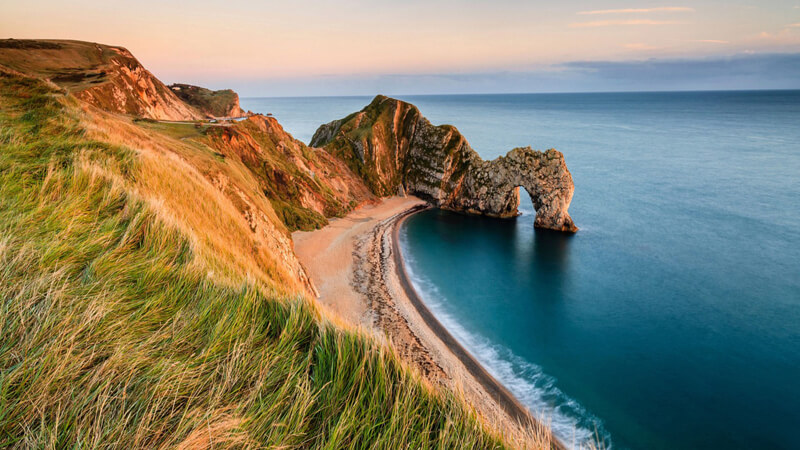 Situated in the county of Devon, the Jurassic Coast is a 95-mile long coastline with immense historical significance. Fossils of marine life dating back to millions of ages can be found in the Lyme Regis and Charmouth areas. The Charmouth Heritage Coast Centre and Lyme Regis Museum also arrange guided fossil walks throughout the year.

The coastline can be explored through the guided tours organized by Jurassic Coast Activities, full of caves and ledges. You can also try sailing on Portland Harbour and Weymouth Bay. If you want to taste some fresh seafood, the Crab House Cafe on Chesil beach and Rockfish in Weymouth serve local fish. 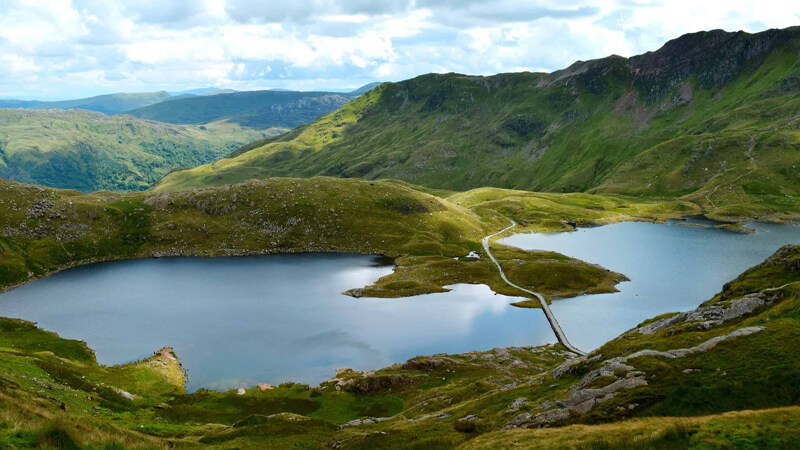 With 14 lofty peaks, Snowdonia is a beautiful region and one of the best places to visit in the UK for the first time. The area has plenty of hiking trails to explore. The best of the views can be witnessed from the hillside village of CapelCurig. Other beautiful villages are Llanberis and Beddgelert. These villages also offer several outdoor activities like rock climbing, paragliding, and water rafting. Snowdonia Mountain Railway is one of the most attractive points of this region. 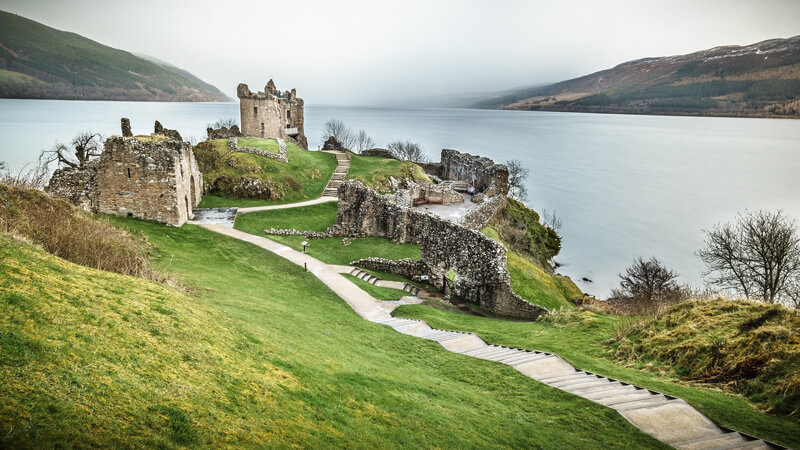 You might wonder why this list of must-visit places in the United Kingdom does not include London. London is one of the most visited places in the UK, and it has several important monuments like the Tower of London, Big Ben, London Eye, Madame Tussauds, and the British Museum. This city alone attracts millions of visitors every year. However, it is a widespread and obvious choice. If you are booking a UK tour package, your package might already include London in it. Therefore, this list comprises places other than London that you should also consider besides London.

If you are looking for some good tour packages, EaseMyTrip can offer you the best. We also provide other booking services like flight ticket booking and hotel booking. Visit our website to know more about our services.

Experience Europe At Its Best With A Long, Relaxing Vacation In Spain