10 Scariest Airport Runaways in the World 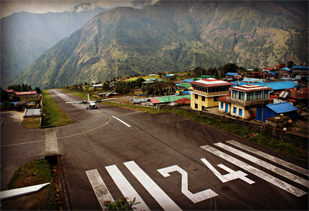 Are you that person who found flying fun and always considered it the best part of going on a vacation, then think again, Majority of airport runways around the world are big and easy to land at, but there are a few runways around the globe which are scary as hell because of the factor involving short runways, high altitudes or unpredictable weather. Here are some insanely dangerous runways in the world.

This airport runway lies so close to a tourist friendly beach and is practically famous for planes approaching at altitudes so low that beachgoers run for cover. Its landing strip is so short that planes must approach the island at an extremely short height, which means flying just 30-60ft feet. While sun bathing, beware of some monstrous object approaching towards you.

Once voted as the most extreme airport in the world by the history channel , its runway is sited between mountain on one end and a thousand of foot deep valley on the other side. Lukla airport is situated in Nepal and is only 1,729 ft. long which is terrifying enough to hold your breath

Located in the French Alps, the runway is built into the side of the mountains. Only specially trained pilots are allowed to land at this airport. The runway is extremely short, measuring in at just 1,762 feet. Needless to say, there's not much room for error when landing here.

The airport's short runway, located between a rocky Cliffside and a vertical drop to the ocean, was known for its variable winds. In 2000 it was extended to 9,124 feet. That might make you experience better about traveling here. until you realize that much of the expansion is done on a platform partly over the ocean, carried by 180 columns. Glide too far on a rainy, windy day and the airplane could go over the side.

The runway which was actually built on the sea, pilots have to skillfully circle the tall mountain of Gibraltar and touchdown. In the center of this landing strip is kind of railway crossing type signal which closes the road for when planes are landing and taking off.

Situated on beautiful saba island, juancho E. yrausquin has the shortest runway of 1300 feet only moreover it is flanked by a mountain slope on one side and water on the other. There is definitely no scoop for error when landing here.

The landing strip runs straight onto the beach, with planes taking off directly over the heads of sunbathers. In fact there is even a small sign advising people not to lie directly at the end of the runway. The History Channel programme Most Extreme Airports ranks Gustaf III airport, which is called as "St. Barth's", as the 3rd most risky airport in the world.

Toncontin is situated in a valley 3,294 feet above sea level and during descent plane need to make a 45 degree bank to affectively reach the runway. Frequent winds creates problem for the pilot forcing for some last seconds adjustments. Because of the surrounding mountains, passenger will experience a quick drop in altitude in order for the plane to land, making it the most dangerous airport landings.

This unique runway is actually the world's only beach runway, located on the shallow bay of Traigh Mhor , Scotland . When the tide is high, the flight times vary accordingly. Only emergency landings are operated at night with some other plane lighting up the runway.

Being in Antarctica, this runway is completely made up of ice .The one important risk the pilot faces is the amount of the plane that land on this runway they are even advised to not sink more than 10 inches into the ice. The fact that there are no smooth runways in Antarctica is enough to make you bite your fingers.