Temples to Visit During Navratri in Delhi

The nine day long festival of Navratri brings peace and festivity and this festival is celebrated with much pomp at several amazing locations of India. However, the capital city of India ‘Delhi’ is gifted with some of the beautifully crafted temples which are known for their elegant structures and outstanding architecture. Some of the temples have found glory by being the temples known for wish fulfilling. Devotees during Navratri visit these temples of Delhi to enjoy the festival of Navratri and to have darshan of Durga Maa to seek blessing. Below is the list of famous temples of Delhi which people visit during Navratri. So, what are you waiting for this Navratri 2018 explore these popular temples of Delhi and take the blessing to lead a life filled with happiness and prosperity.

This ancient temple of Delhi is located on Jhandewalan road and recieves hundreds of devotees especially during Navratri. This temple is one od the most famous temples of Delhi which is dedicated to Maa Aadi Shakti. The temple receives this name ‘Jhandewalan’ during Shah Jahan’s reign due to the prayer flags or Jhandas being offered there. On the occasion of Navratri, special puja is also performed at this temple of Delhi and is beautifully decorated with flowers and vibrant lights. It is one of the best temples to visit to witness Navratri celebration in Delhi. 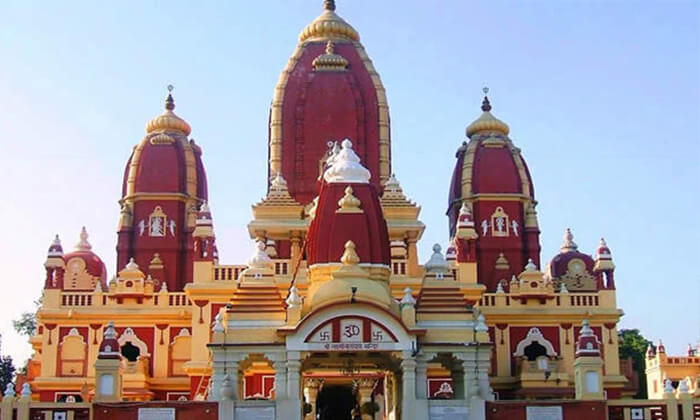 Kalkaji or Kalka temple is another old temple of Delhi which is dedicated to the Kali avatar of Goddess Durga. This temple was built in 1764 AD and it is believed that the Pandavas from Mahabharata had also worshipped there. Kalkaji temple is believed as ‘Manokaamna Siddha Peetha’ or ‘Jayanti Peetha’. According to the locals this temple is the place where the Goddess Kali fulfills the devotees’ wishes and devotees visit in large number to Kalkaji temple during Navratri. Kalkaji temple is one of the temples where Navratri festivity can be observed.

Sheetla Mata Temple is another famous temple in Delhi area and is located on Sheetla Mata Road. This temple receives large number of devotees at the time of Navratri. The large structure of this temple is something which can be spotted easily and one can easily reach this temple. Devotees visiting this temple are not allowed to touch the idol but they can just offer flower and prayer to the idol from a distance. It is also one of the famous temples in Delhi which one can explore during Navratri.

Chhattarpur temple is a very famous temple in Delhi and this temple receives numerous devotees on normal days as well. This marvelous temple has a beautifully crafted structure and the temple is dedicated to Goddess Katyayani. This temple has the second largest temple complex in India, situated on the southwestern outskirts of Delhi. Chhattarpur temple of Delhi also has a main temple of Goddess Katyayani which opens only during Navratri. During Navratri large number of visitors assembles there for holy darshan of Maa Katyayani. It is another must visit temple of Delhi to see Navratri festivity.

Gufa temple is situated in Preet Vihar area of Delhi. It is one of the old temples and is dedicated to Mata Vaishno Devi. This temple is known for having a large cave inside the temple which gives the feeling as if one is in the Vaishno Devi shrine. It has another small cave and the main attractions of the cave are the idols of Goddesses Katyayani, Chintpurni and Jwala Devi. This temple attracts lot of devotees during Navratri

Yogmaya Temple of Delhi is another popular temple which devotees visit during Navratri. It is dedicated to Goddess Yogmaya, the sister of Lord Krishna, this temple in Mehrauli is believed to be one of the five surviving temples from the Mahabharata period. At the time of nine day festival ‘Navratri’, a large number of devotees visit this temple. Yogmaya temple is one of the temples of Delhi which is decorated during Navratri.

This temple of Chittaranjan Park is well known for being the abode of Devi Kali which is one of the Durga roop and is profoundly worshipped by the Bengali community. During Navratri and Durga Puja this place comes to live and numerous of devotees visit here to offer their prayers and gratitude Kali Maa.

Historic Forts around Mumbai One Should Definitely Explore

Highest Skyscrapers and Tallest Structures in the World

10 International Borders of India You Should Definitely Visit