Stunning Yet Abandoned Cities Around the World 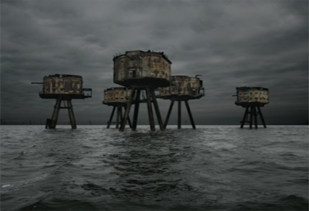 Some places are there flourishing, developing and getting older with times, whereas some others expire as their own death, be it the biological wrath or human reasons yet these places have their own sense of un dying attitude where they become more beautiful even after decaying to become one of the elements of this universe. Below is the list of some deserted destinations those make us believe the existence of some beautiful land that we had lost.

Where: Namibia
Founded by the German settlers, kolmanskop as a city in the Namib Desert had a very shorter life span from the year 1900s to 1950s. Though now this peculiar town has a new addition which has opened in 1980, but other than the place are simply depleting and the elements of the region getting away.

Where: Montana, United States
Located at an elevation of 6,000 ft, the small historic town of Garnet is beautiful surrounded by the stunning mountains and pretty houses scattered over the places that can be seen till now. The place was earlier inhabited by the 1000 people during the Gold Rush period but got abandoned in the year 1920- 1930 since the gold has become scarcer to be discovered around the region.

Where: Italy
We have seen the place many times in the famous Hollywood movies but never probably had heard about it. It is a tiny little town from the 8th century when it was pretty bustling and looking picturesque being situated over a hill, but the things for the place has gone worst when natural disasters like earthquake and landslides taken a toll over the place turning it into a piece of nothing.

Where: Buenos Aires Province, Argentina
Constructed in the year 1920's, a village on the edges of Lake Epecuen was a famous tourist destination in the early times of 1985 till the time a disaster took over the town when the dam holding the water has failed because of which the place has drowned and we have lost it completely.

Where: Mexico
The stunning village of San Juan Parangaricutiro located in the state of Michoacan, which got devastated by the volcano erupted in 1942. There is a church still standing which attracts the tourists in large number since they believed it to be survived because of God which still serves as the reminder of the place's existence

Where: California, USA
One a lively town till late 1800s because of the Gold Rush, the place has started to become lost when the settlers began to move out, deserting it. As a National Historic site, the town is maintained as the arrested decay' meaning the structures of the region are protected not restored.

Where: Cyprus
Earlier considered as the French Riviera of Cyprus, the charm of the beach has been replaced by the emptiness of the place and corroding surroundings devoid of any human life. The town got depleted because of the Turkish invasion in 1974 that has brought the disaster and let the place to rot. A visit to this once lively town will have to wait till a settlement is reached between Turkey and Cyprus.

Where: Russia
Situated on the Volga River, north of Moscow, the town was established with a population of 15,000 people in the year 1134, but the majority of the town has got drowned during the construction of Uglich reservoir in 1940. Only the bell tower of the St Nicholas Church stands as the landmark depicting the town's existence.

Where: India
Just miles away from Port Blair, Ross Island is a destination you can visit in Andaman and Nicobar Islands. This charming piece of world on earth was shattered because of the earthquake that came in 1941. Now the situation has gone little barren yet the buildings like a bakery and some local stores are trying to bring back some life to this must explored destination.