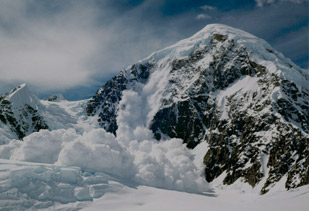 Yes Siachen is a place where human body literally screams for oxygen and simply refuses to act normally. Even when you are pretty much equipped with the best snow gear and clothes in the world. The life there at that spot is much more than just a hard task. The suffering one goes through is unimaginable. Our soldiers with human bodies not only faces every thing, they strive on day after day, guarding the highest battlefields which will protect the country from the enemy. To understand the conditions of the place, we bring to you some of the harsh facts about the region and the conditions with which our soldiers go through.

During some bad days, there remains zero visibility where you cannot even see your hand in front of your face. During such conditions, soldiers tie each other with ropes so that no one loses the sight of each other in the chaos.

When the snow storms come, it has the possibility of lasting for an extended period of time. The condition becomes unbearable as there remains no food left and soldiers have to plan to collect their present supplies until the storm gets cleared.

No beds to sleep

In the camps at Siachen glacier, there are no beds. Soldiers store the supplies and use them as beds.

Where we complaint about our geysers not working properly, soldiers in Siachen cannot have a proper bath as the water will obviously not remain warm long enough.

The soldiers have started to be provided with bio- toilets, but not every base camp have it. Soldiers have to walk long into the deep snow to defecate in the open.

Feeling of Isolation can make you crazy

The Feeling of Isolation can drive people mad as psychological effects can be more dangerous than physical effects, hence it becomes the necessity to remain busy

Soldiers remain in the harshest conditions where they are at the risk of getting Frost Bites- a condition that results from a sudden exposure of fingers and toes to the extreme cold. In extreme cases, the organ just falls apart. The cold is unbearable, so is the sun. If you remained outside for a while, you may get frostbite and sunburn too.

At such height, one can start to lose weight, face sleep disorders, don’t feel like eating and a memory loss – which can be a common occurrence. Yes, that’s what happens at Siachen.

It has been seen that the major causes of deaths happens because of the blood clots. The chances of a human body to develop blood clots is 100 times more in Siachen than at sea level. Carrying atleast 30 kilos of loads at all times Each soldier has to carry around 30 kilos of baggage everytime, even during the patrolling over long distances.

When sweat freezes between your body and clothes

The temperature is so cold that nothing liquid can stay liquid even after 7 layers of protective clothing. Imagine what it would mean when a Local say: ‘The land is so barren and the passes so high that only the best of friends and fiercest of enemies come by.

Do you really want to know what it feels like to be there?

Far away from the reach, the area is totally off limits for the civilian, but for those adventure freaks who always have dreamt about exploring the extreme, there is a good news as for now the civilians can trek the great Siachen glaciers with the Indian Army.

Since 2007, the Indian Army’s adventure wing is organizing one annual trek to the glaciers of Siachen with Indian locals. The trek will cover 60 km climb from Siachen Base Camp to Kumar camp with an altitude ranging from 12,000 ft to 16,000 ft respectively. It takes a month to actually experience acclimatization, medical checkups along with the trek that goes about for 13 days in August-September and about 30-40 civilians are selected from the defence forces, media, Rashtriya Indian Military College and Rashtriya Military School cadets and trekking enthusiasts recommended by the Indian Mountaineering Foundation (IMF). This is the only chance for a civilian to visit the world’s highest and coldest battlefield. So ,Gear up all adventure lovers and get ready to experience the feeling of extreme.