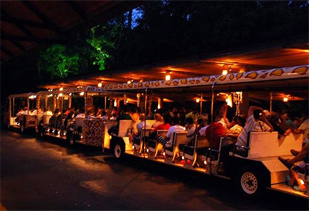 In the unbelievable fast life, there is still something that cannot take away the charm of the traveling on a much slower pace with experiencing and appreciating the stunning sights along the way. Yes, it's the tram, riding on the oldest tram network asking us to slow down and enjoy the life and its surroundings. Serving as the mode of transport in many of the cities, below are some of the tramways across the world which has been significant as tourist attractions also. These tramways have come a long way and still continue to stand and show their worth.

Where: Portugal
The tramp of this region walk down the steepest roads and sharpest turns alongside the colourful neighborhood of Alfama Region. While commuting through these tramp, it moves circling around like a snake. In total there are five different tram routes, which either head east (towards Alfama) or west (towards Belem). No visit to Lisbon is complete without taking a ride on one of these classical beauties.

Where: Spain
There cannot be a better way of exploring the area other than traveling through the tramp. On October 4, 1913 the first electric tram line between Sóller and Mallorca Port de Sóller was inaugurated. These classic beauties made of iron, wood and glass runs on a 3 feet wide gauge. The route has 17 stations, with each train running at approximately 30 minute intervals, one after other.

Where: New Zealand
During the early times, these tramps were initially pulled by the horses but later in the year 1905, these tramps were transferred into electricity. The opening time of the tramps areas follows- Summer: 9am – 6pm daily (September – March), winter: 10am – 5pm daily (April – August). There are currently 17 stops along the route and passes through some of the most stunning sights along the journey.

Where: Italy
Since 1881, the light rail system has played a significant role in the public transport system of Milan. The Milan tram system is considerably centralized, with around half of the tram lines passing by, or terminating nearby. These tramp passes through some of the finest sights of the city giving you an exceptional pleasure while commuting.

Where: Australia
This ancient historic tramp passes though the busy streets along the inner suburbs of the Melbourne .being the world's third largest tram network , riding through the tramp is the most perfect thought and the best way to explore the hidden beauties.

Where: China
These tramways are the earliest forms of public transport, running in the city. Being not only used as the form of commuting transport for over 110 years, these tramps are a major tourist attraction. It is only one in the world using the double Decker system of transport.

Where: Russia
Started in the year 1872, these tramps of Moscow have played a significant role as a mode of transportation. When the metro route looks too busy, one can easily explore to ride on these vintage tramps while capturing the beauty of the city.

Where: USA
These are the world's last manually operated cable car system used to explore the stunning skylines of San Francisco and the hilly areas. These tramps look like lovely classic wagon as the most significant tourist attractions in the city.

Where: Hungary
While exploring the stunning Hungarian capital, do not forget to experience riding on the beautiful heritage streetcars which will help you to have a look into the place in a much better way with some of the mesmerizing sights along the ride.