Dreamy Destination for every Mountaineer 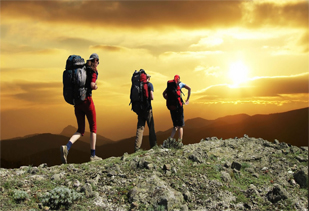 Mountaineering is becoming more popular day by day among dare devils and adventure freaks, involving the mixture of ice and rock, that takes you to an another world. These are the places covered in ice, snow and sizzling with lowest temperature. For the all the mountain lovers, following is the list of dreamy destination.

Toughest climb must be an understatement for this huge and dangerous mountain. This mountain is pretty much known for taking the lives of a many expert mountaineers. Regardless of this risky factor, the climbers found it as the most desirable beauty in the world. Till august 2015, the number of total summits has been a total of 7,000 with as many as 4,093 mountaineers. The death zone of this mountain is where the situations get difficult and the climber can get frostbite on the body parts left open in the air. The area is completely ice that is why the chances of death become very high.
Elevation: 8,848 metres (29,029 ft)
Location: Nepal-Tibet border

K2 is the second tallest mountain peak in the world, located in the border of Pakistan–china, which is considered simply the beauty as well among the extreme difficult one to climb. The peak is famously called as the savage mountain known for taking the lives of experts climbers with the one in every four assume to die on the mountain. The rise is tough from both the borders but the Pakistani side is more ascendable than the Chinese side however the peak has never been climbed till now in winters.
Elevation: 8,611 metres (28,251 ft)
Location: China-Pakistan border

Worshipped by the people, the peak is popularly called as the five treasures of snow after its five high peaks; Kanchenjunga is the second tallest mountain in Nepal after Mount Everest and the highest in India. Even after the rate of fatality in the mountains attempted to rise, the number of summit has also scaled up.
Elevation: 8,586 metres (28,169 ft)
Location: Border between eastern Nepal and Sikkim

The peak is famously called as the 'killer mountain'. Just like K2, Nanga Parbhat has also not been tried to climb during winter season. This notorious mountain peak is very dangerous, where the cases of death of the mountaineers heard is very usual and common. Even after knowing the dangerous nature of this mountain, the rate of ascent has increased.
Elevation: 8,126 metres (26,660 ft).
Location: Gilgit-Baltistan region, Pakistan

Recognized as the most tough climb, the Annapurna is a huge mountain peak , consisting of 1,13 peaks over 7,000 metres where 16 of which stands 6,000 metres above. Number of deaths in the area is much higher than anyone can heard of, making it the highest among all the famous eight – thousanders.
Elevation: 8,091 metres (26,545 ft)
Location: Himalayas, North-central Nepal

The mountain peak that stands at the height of 8,000 meters is simply a death zone. Even the weather condition of the mountain is very risky where the layer of atmosphere is too thin making difficult to survive in the region, although comparatively the Mount Everest is still much easier to climb.
Elevation: 8,516 metres (27,940 ft)
Location: Border between Tibet (China) and Nepal.

Located 19kilometeres from Mount Everest, Makalu is four sided pyramid having two subsidiary peaks of Kangchungtse and Chomo Lonzo. The mountain is most difficult to climb on with its exceptionally sharp edges and pointed pitches. The final hike requires climbers to do rock and ice climbing. This mountain is pretty famous in the mountaineers who believing riding on this adventure of Makalu .
Elevation: 8,485 metres (27,838 ft)
Location: Mahalangur Himalayas, southeast of Mount Everest, on the border amid Nepal and China.

Almost half in the size of the eight- thousanders, Matterhorn gives a fair idea of the danger quotient to the climbers. The mountain is stunning to look and pretty dangerous too, where it has been estimated that 500 have died while climbing this peak since the very first of its climb.
Altitude: 4,478 metres (14,692 ft)
Location: The Alps, on the border linking Switzerland and Italy.

Mount Elbrus is essentially a dormant volcano that came into being 2.5 million years ago. Experts believe that climbing the peak of this mountain is very difficult but the frequently changing weather conditions might become deadly for anyone. Most favorable time to climb the highest point of Russia and Europe is June- August. It is advised to be prepared with all your needy stuff while facing any kind of weather conditions there.
Altitude: 5,642 metres (18,510 ft) – West summit, 5,621 metres (18,442 ft) – East summit
Location: Western Caucasus Mountains

Not like the pointers, mount Kilimanjaro is a flat one with large stratovlcano and three definite volcanic areas - Kibo , Mawenzi and Shira . The place is famous climbing destination and subject of many scientific studies happening on its shrinking glaciers. The first documented summit to the mountain was finished in 1889 by Hans Meyer and Ludwig Purtscheller.
Altitude: 5,895 metres (19,341 ft)
Location: Tanzania

Formerly known as the Mt. McKinley, Denali is the highest mountain in North America and third important peak after Mount Everest and Aconcagua. The first successful summit was completed by the Walter Harper, Robert Tatum and Hudson Stuck, who climbed up on the south summit. The most famous route taken by the climbers is the West Buttress route, which is considered as the easiest and safest.
Altitude: 20,310 feet (6,190.5 m)
Location: Denali National Park and Preserve, Alaska

Mont Blank shorter height does not make it less dangerous. The mountain is fairly easy to climb and is most famous among amateurs. The mount also sees a large number of deaths every year. And locals have to go through and take 12 missions to help the climbers in trouble.
Altitude: 4,809 metres (15,778 ft)
Location: Graian Alps, between the regions of Aosta Valley, Italy, and Haute-Savoie, France.

Cerro Torre is the highest peak belonging to the series of four other mountain peak involving Punta Herron, Torre Egger and Cerro Standhardt. The level of difficulty to climb can be understood simply by having a glimpse of the place. It can be a good destination for the mountaineers to climb.
Altitude: 3,128 metres (10,262 ft)
Location: Southern Patagonian Ice Field in South America, located between Argentina and Chile

The eastern face of the mountain offers the symbolic views of the Swiss Alps whereas the most significant feature of the mountain is the north face of it, which is majorly dangerous also. The name given this side is Mordwand, meaning murderous wall owing to the number of deaths of the climbers who tried to climb up the mountain.
Altitude: 3,970 meters (13,020 ft)
Location: Bernese Alps

The most interesting about this stunning mountain is the fact which says that it wasn't discovered until 1958. Basically mount Vinson is a massive rampart of stone and the tallest peak in Antarctica.
Altitude: 4,892 metres (16,050 ft)
Location: Ellsworth Mountains, Antarctica