10 of the Most Popular Historical Forts to Visit in India 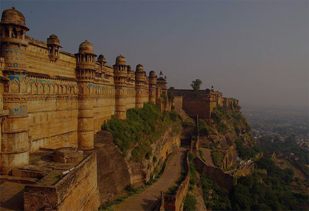 If you talk about the most prominent remnants of Indian history, the first thing that comes in mind are its majestic forts. Indulged into several historical tales, the forts of India are the live witness of the several royal legends of India. You can discover many glorious aspects of the rich past of India through still existing magnificent forts. Forts of India enjoy a mysterious and extravagant ambiance and are still an inherent part of its rich heritage. A number of visitors from all over the world come to explore these wonderful forts of India that bestow absolute extravagance.
Here is the list of the most splendid forts of India.

Red Fort of Delhi was selected as a World Heritage Site by UNESCO in 2007 and is a must visit attraction in the capital city of India. Built using red sandstone, the fort is situated in clamor of Old Delhi. The fort used to be the residence of the Mughal emperors of India, until 1857. The main gate of the fort is called as Lahore Gate, which attracts a huge crowd on eve of Independence Day. The fort was built by Emperor Shah Jehan in 17th century. It features a huge lotus made of a single block of marble that will surely amaze you.

The literal meaning of Vaidyanath is the Lord as doctor. As per the legends, Shiva treated the slashed heads of Ravana like a doctor that he severed in order to please Lord Shiva. Baidyanath Dham is one of the Jyotirlingams of India, which is located in Jharkhand state of India. The temples complex is comprised of 22 temples having dissimilar heights dedicated to various deities. Various antique elements can be seen in this temple. The auspicious occasion of Mahashivratri is celebrated here with great fervor.

The magnetism of this incredible fort of Jaipur is such that even the scorching sun of May and June can’t stop tourists from exploring this architectural marvel. Built with the blend of Rajputana and Mughal architectural style, the fort is positioned over a hilltop enjoying the view of Lake Mayota. The ambiance of the fort has got an aesthetic feel with artistic archways and elaborate doors that offer picturesque views. The ceilings and walls of the fort are decorated with mirror work, complex carvings and symmetric paintings that leave the visitors amazed.

Originally called as Chintamani, Junagarh Fort is one of the very few forts of Rajasthan that are not built over a hilltop. The fort complex was constructed under the supervision of Karan Chand – a Prime Minister of Raja Rai Singh, who ruled between 1571 and 1611 AD. The construction of the walls and associated moat of the fort was started in the year 1589 and finished in 1594. The fort represents an amalgamated culture, which is evident in the various architectural styles. There are many palaces and temples in this fort, which are built of red sandstone and marble. There is also a museum in this fort that displays various belongings of kings and queens.

Mehrangarh Fort is the true symbol of power and honor in Jodhpur. The breathtakingly majestic fort in Jodhpur is the real glory of the city and the main base of its tourism. The fort was constructed during 1460 by Rao Jodha and is positioned 410 feet above the city. The fort is surrounded with magnificent thick walls and one can witness the marks of cannonballs on these walls. The fort is huge, beautiful and appealing. This architectural masterpiece has seven gates and it also features a well-stocked museum displaying a collection of royal palanquins, weaponry, costumes, paintings and much more.

Located in the city of Jaisalmer, Jaisalmer Fort is among the largest fortifications of the world. It is a UNESCO World Heritage Site, which was constructed in 1156 AD by the Rajput ruler Rawal Jaisal. The fort is proudly located amidst the sandy stretch of the great Thar Desert. Its immense yellow sandstone walls appear yellowish-brown during the day and turns shades as sun changes its position. The fort is 1,500 feet long and 750 feet wide and is constructed over a hill that rises more than a height of 250 feet. Situated in the heart of the city, Jaisalmer Fort is one of the most remarkable monuments of the region.

Gwalior Fort is an 8th century strikingly magnificent hill fort. The moment sunrays fall on the fort, it shines like a beautiful jewelry enhancing the beauty of Gwalior. The fort features artistic sculptures and sapphire paintings on its walls that enrich its splendor in every way. The fort has a place called Gujari Mahal that is converted into an archaeological museum. The museum displays a rare collection of Hindu and Jain sculptures. The fort used to be the home of the Scindia family and at present, it is one of the steadiest forts in India.

Also recognized as Golconda or Golla konda, Golkonda Fort is a huge citadel in Southern India. The fort is situated 11 KM west of Hyderabad. The fort was originally constructed by the Kakatiya dynasty as a part of their western defenses. It was erected on a granite hill that is 480 feet high and encircled by colossal battlements. This fort was built again to enhance its mightiness by Rani Rudrama Devi and her successor Prataparudra. Later, the fort came under the supremacy of various rulers. Golkonda Fort was having a crypt where very famous Kohinoor and Hope diamonds were preserved with other diamonds.

Chittorgarh Fort is among the largest forts of India situated in Chittorgarh. The fort grandly spreads over a hill of 180 meters height and positioned over an area of 692 acres. The fort is the evocative of the history of the city and is dotted with a series of historical palaces, gates, temples and two important memorial towers. The magnificent fort was mostly ruled by Rajput kings, until it was finally discarded in 1568 after being captured by Emperor Akbar in 1567.

Popularly known as ‘Jhansi Rani ka Quila’, Jhansi Fort was built in 1613 by Raja Bir Singh Ji Deo – king of Orchha. It is situated on the rocky hill known as Bangra. It extends to an extensive land of 15 acres and this colossal structure is around 312 meters long and 225 meters wide. The fort has 10 gates, including Khandero Darwaja, Chand Darwaja, Datia Darwaza, Sainyar Darwaja, Unnao Darwaja, Orchha Darwaja, Jharna Darwaja, Sagar Darwaja and Laxmi Darwaja. The fort features a great collection of sculptures that give an insight into the historical legacy of Bundelkhand.
There are many other fortifications and colossal forts in India where one can go to discover the historical legacy of the country. EaseMyTrip offers the best deals on hotels of these destinations.