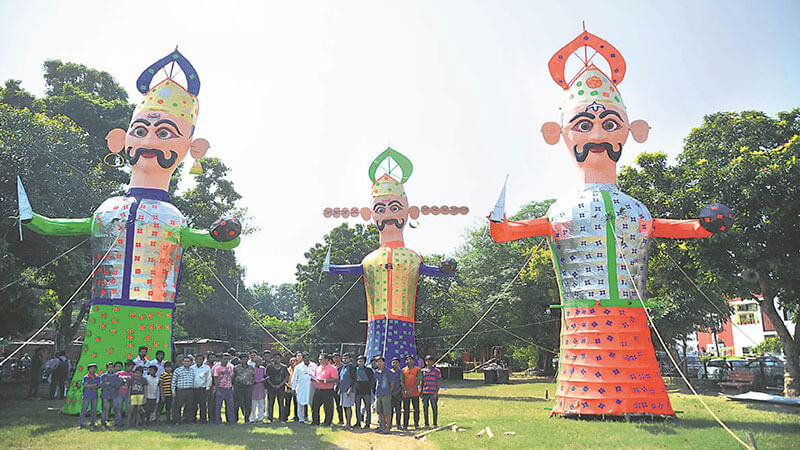 Dussehra is one of the most distinguished festivals of Hindus, which celebrates the victory of good over evil. The festival has special meanings for different people. In some parts of India, it is celebrated as the end of their 9-days fasting while in some parts; huge celebrations take place on this occasion. States of India celebrate Dussehra as the defeat of Ravana by Lord Rama and some celebrates it as the destruction of demon named Mahisasur by Goddess Durga. Each Indian state celebrates the festival in its own way but the grace and ethnicity play an important part in the festival no matter where it is being celebrated. Explore the states where this grand festival of Durga Puja is celebrated in a beautiful way. 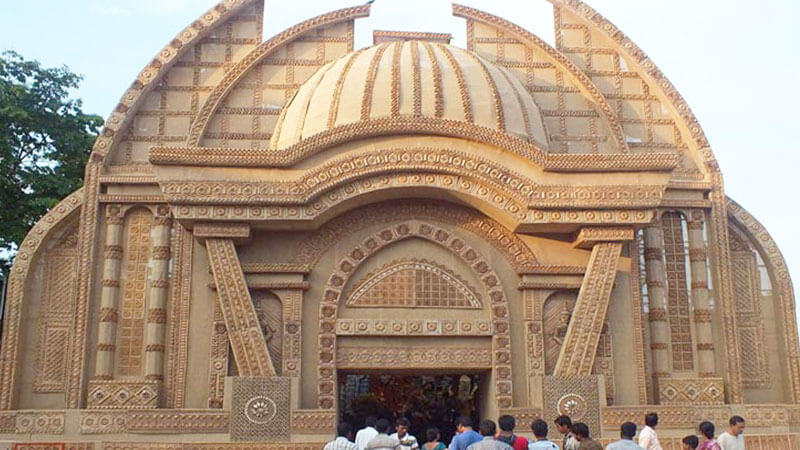 Durga Puja or Dussehra in West Bengal gives the state its real identity. The festival transforms the entire state into a dynamic activity hub. The festival holds great importance in the lives of every citizen of West Bengal. Various theme based pandals are created where amazing idols of Goddess Durga along with other deities including, Ganesh, Laxmi and Saraswati are worshiped for 5 days. People desperately wait for this event from long. Such eagerness and excitement of worshiping Goddess Durga can nowhere be seen in India. 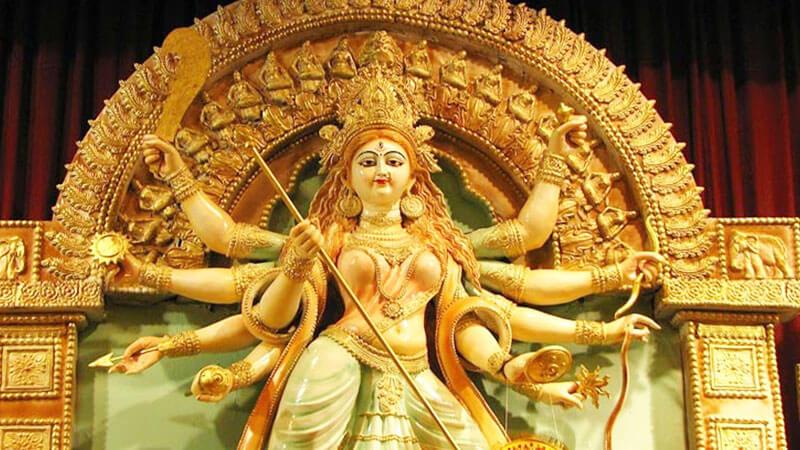 With Famous Garba in Gujarat 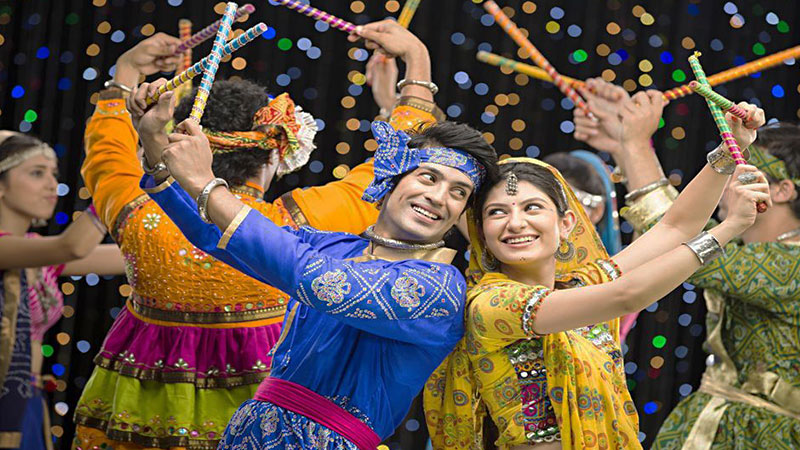 In the colorful state of Gujarat, Dussehra is celebrated as Navratra. Garba is the prime ingredient of this festival in this state, which is the very famous folk dance of Gujarat. It is the main attraction of the festival that brings people close and make them tune on the folk songs with multi-colored sticks. Garba is played throughout the night after worshiping Goddess Durga. For playing Garba, men and women wear traditional attires that are Lehnga Choli for women and Kedia for men. 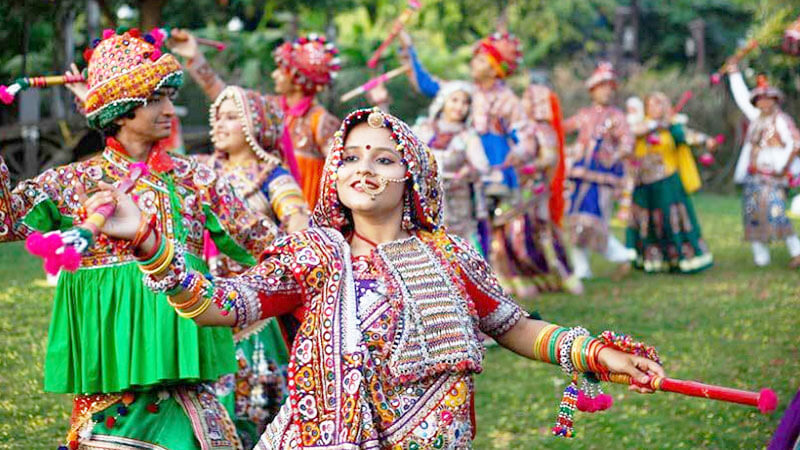 With Grand Procession of Lord Raghunath in Kullu, Himachal Pradesh 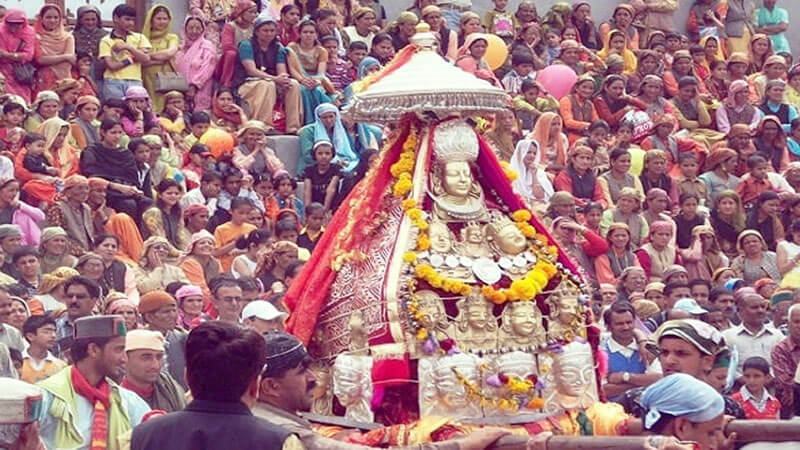 Dussehra in Kullu town of Himachal holds special significance as it is celebrated with great enthusiasm. The festival is celebrated in a unique way here and carries on for 7 days. People from Kullu worship Lord Raghunath on the fairground of Dhalpur Maidan. Nearby villagers bring the statues of different local gods and goddesses at this fairground in a holy procession. The entire valley gets loaded with joy of festivities for whole week. 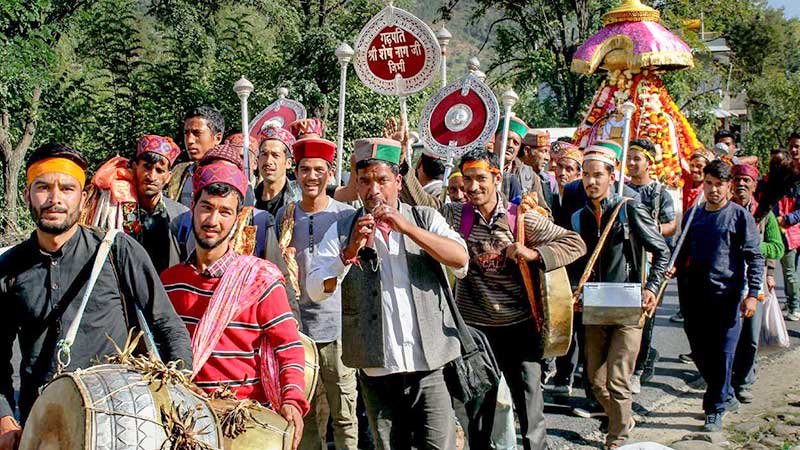 With Wonderful Ram Leela in Delhi 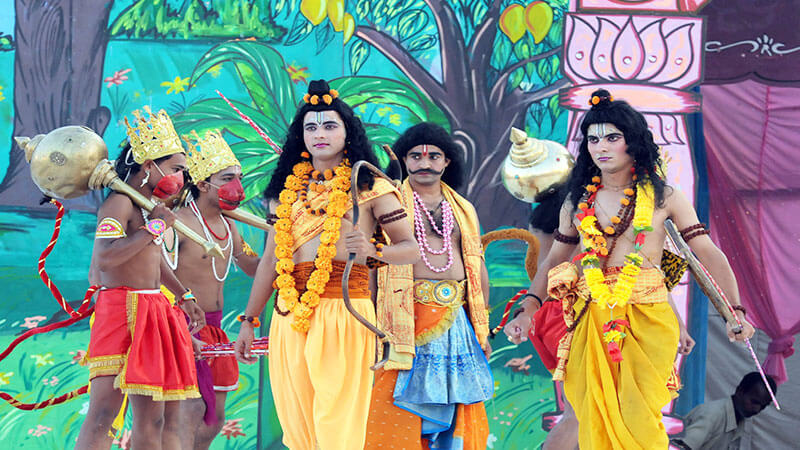 Delhi celebrates Dussehra as the defeat of Ravana by Lord Rama. Temples are decorated wonderfully on this eve and Ram Leela is one of the greatest appeals of the city. Idols of all three demons, including Ravana, Meghanad and Kumbhakaran are set on fire at various locations of the city. Most of the people in this city keep fasting of 9-days. Watching Ramleela - a theatrical version of the Ramayana in Delhi is a beautiful experience. There are many places in Delhi, where Pandals of Goddess Durga are created. 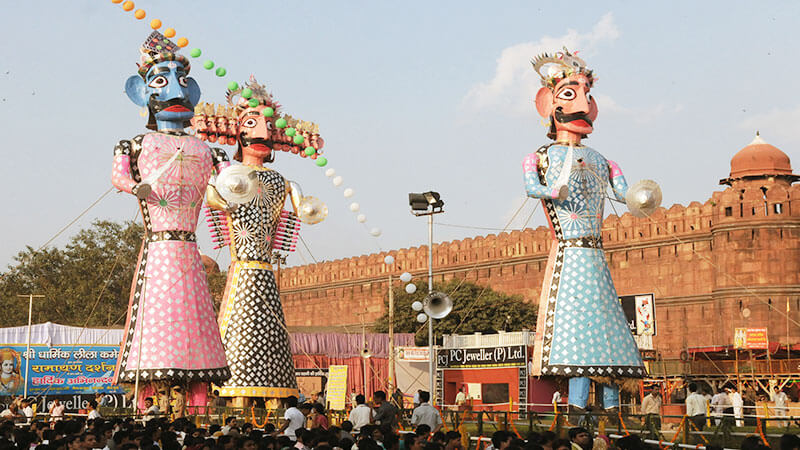 With 9-Day Fast and Worship of Shakti in Punjab 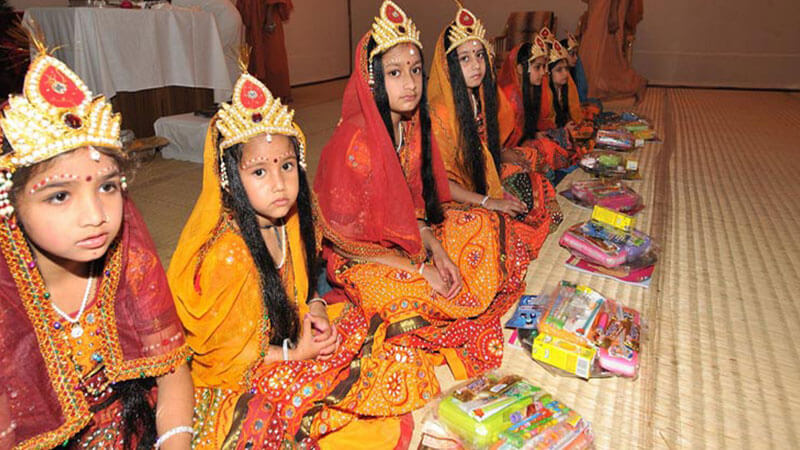 Indian state of Punjab also celebrates Durga Puja in a beautiful way. They worship Goddess Shakti. People from Punjab go through the fast of 7-days during Navratri and at many places; they also arrange Jagraata (Waking up for entire night by singing devotional songs). On the 8th day or Ashtami, they open their fast along with organizing Bhandara for 9 little girls known as Kanjika.

With Worshiping Goddesses in Tamil Nadu 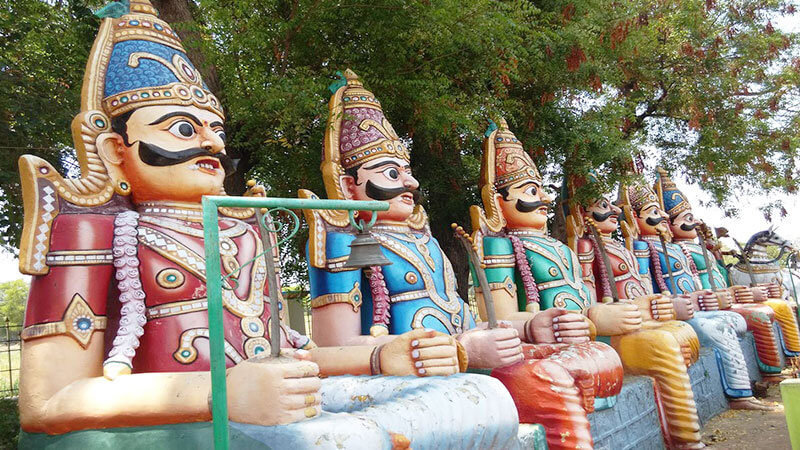 Tamil Nadu state celebrates the festival in an entirely different way. They bring a special religious feel in this festival by worshiping Goddesses Durga, Lakshmi and Saraswati. Almost each house of Tamil Nadu arranges the popular doll shows during Dussehra. At this time, married women invite each to their homes in the evenings and gift them accessories related to matrimonial symbols. They also offer coconut, betel nuts and money to each other.

With Ravan Dahan in Uttar Pradesh 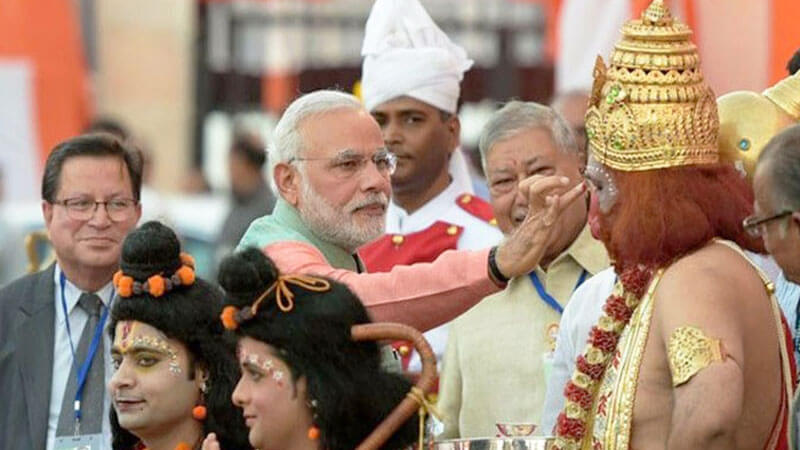 There are many places in Uttar Pradesh state of India where Dussehra is celebrated by setting statue of Ravana on fire by Lord Rama. It depicts the victory of good over evil. At cities like Varanasi, Lucknow and Kanpur, Ram Leela is performed on grand level at prime locations of the city. Actors in the attire of Lord Ram, Lakshman and Hanuman perform the epic saga using audio visual devices and audience is thrilled to see them while assassinating the idols of Ravana, Kumbhakaran and Meghnath.

By Worshiping Nature in Chhattisgarh 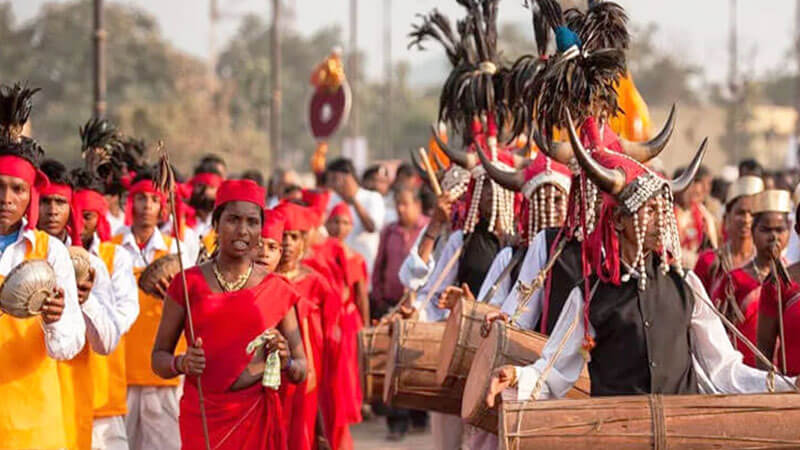 Chattisgarh celebrates a unique kind of Dussehra that is all about rejoicing nature, spirituality and the presiding deity of the state. They worship Devi Danteshwari (the presiding deity of Bastar). Unique rituals to perform on Dussehra in this state are pata jatra (worship of wood), deri gadhai (installation of kalash), kachan gaadi (installation of throne for Devi Kachan), nisha jatra (night-time festival), muria durbar (conference of tribal chieftains) and ohadi (farewell to deities) on last day. 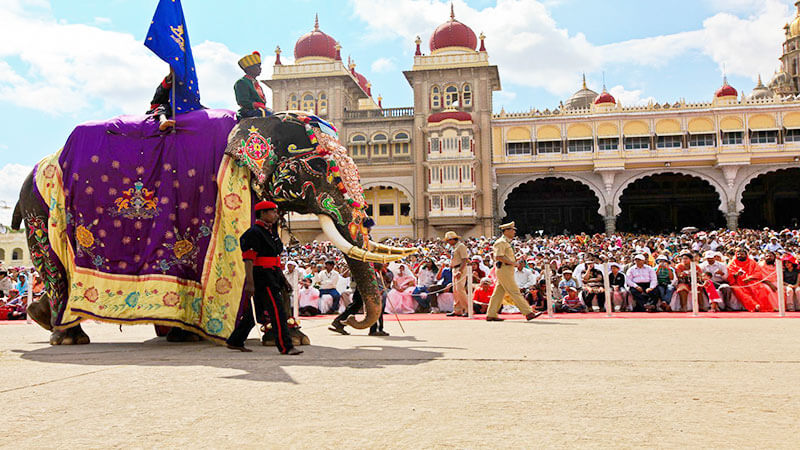 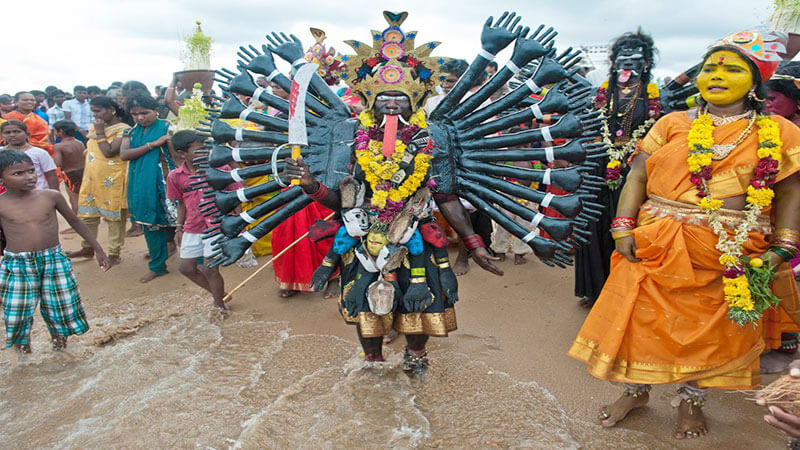 Kulasekarapattinam Dasara is a different way of celebrating Dussehra in Tamil Nadu state of India. The festival goes alive during 10-days Dussehra festival in state. The festival is celebrated around the Mutharamman Temple, which is a hotspot of music, dance and drama and showcases an amazing range of vibrant costumes. An exclusive aspect of this festival is a trance dance in which people swing in unique costumes on the lively beats of thara thappattam