Magnificent Durga Puja Pandals in Kolkata You Must Visit

Celebrated with much enthusiasm and zeal, Durga Puja is an extravagant affair in Kolkata. Bringing together the affluent religious as well as cultural history, Durga Puja is the time when Kolkata brightens up with lively colours and become a perfect place to travel for. During this time, the city takes you to the people wearing traditional clothes, lively bazaars along with more than thousand colourful Pandals, revealing various forms of goddess Durga. With the most elaborate and innovative themes, these Kolkata Durga Puja Pandals attract people from all over the world and make Durga Puja one of the greatest events in India. So, here we present to you the best Durga Puja Pandal in Kolkata. 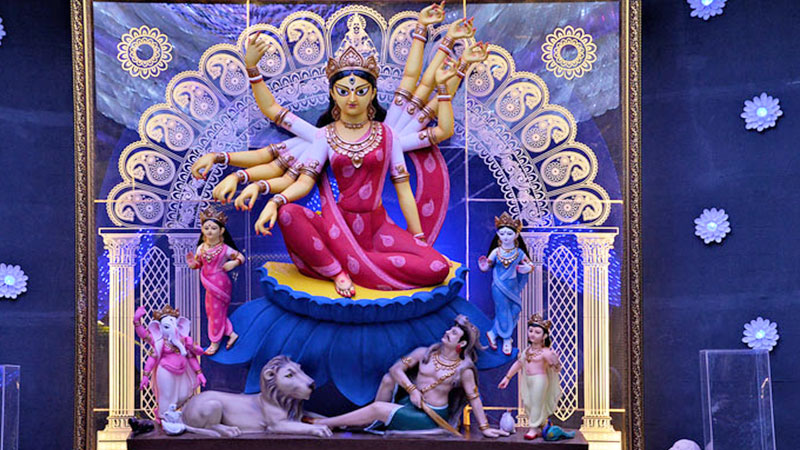 Location: North Kolkata, along the river at Kumartuli Park, just before Bagbazar.

It is one of the youngest and the prominent Durgatsab in Kolkata, displaying the grandeur of Goddess Durga in the most amazing way. The Kumartuli Park Durga Puja Pandal displays a fusion of old-fashioned art and magnificence architecture which brings every aspect of traditional Indian culture. The Puja here is particularly different because it takes place where many of the Durga idols are handcrafted by professional clay makers. Moreover, the idols of the goddess Durga and other deities made by these potters of Kumartuli are also exported to US, UK, Canada and southeast Asian countries for the Durga Puja Festival. 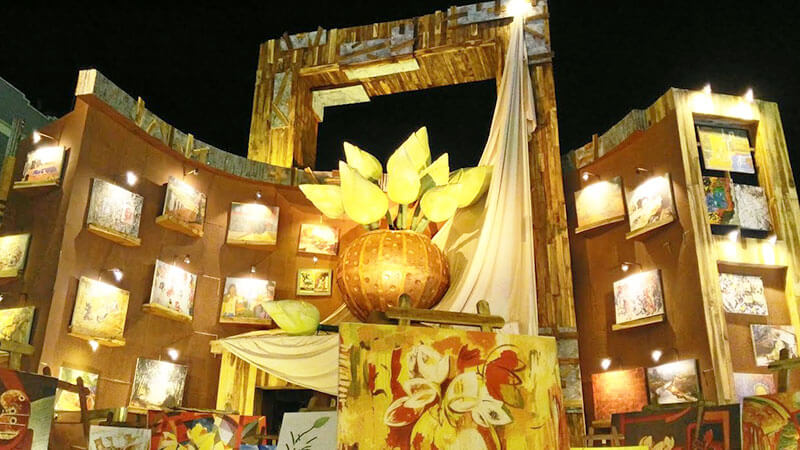 Almost being there for 100 years now, Bagbazar is one of the oldest Durga Puja Pandals in Kolkata. Situated near Bagbazaar Launch Ghat in North Kolkata, It is comparatively a simpler one with major importance given to the traditional rituals and culture. This Durga Pandal in Kolkata is one of the most renowned pandals and attracts a huge number of crowds from all over India. The pandals bring beautifully decorated the idol of Goddess Durga along with carnival rides, stalls and exhibitions. They also organize art and dance events to let you experience the charm of Durga Puja in the most beautiful way possible. 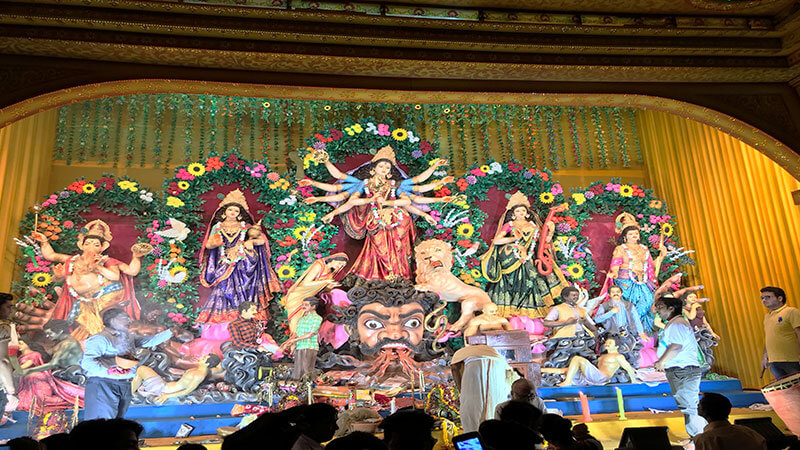 Organized every year with great enthusiasm, Durga Puja held at Mohammad Ali Park is one of the popular Durga Puja organized in Kolkata. The event displays various replicas of famous monuments all over the world, magnificent architecture and artistically decorated various forms of Goddess Durga. The decoration of the Durga Pandal is so detailed and amazing that it will always going to be a must-watch thing in Kolkata. 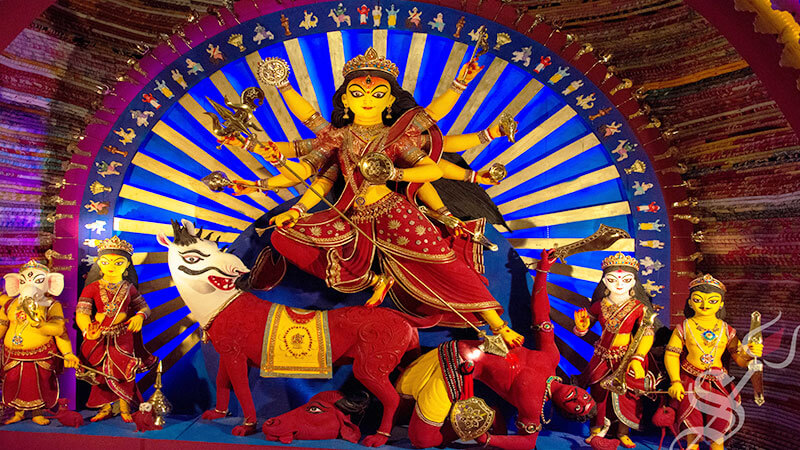 Depicting a variety of themes and forms of art, Dum Dum Park Tarun Sangha Durga Puja is a must-visit during the Durga Puja festival in Kolkata. Like every year, the specialty of the Puja Pandal is the amazing display of lively colours and the diverse form of goddess Durga. All these celebrations in Durga Puja enhance the festive mood and bring you more close to your family and obviously the Goddess Durga, crafted by the expert artisans. Along with the lively ambiance and bazaars, there will be a live folk performance by renowned artists. 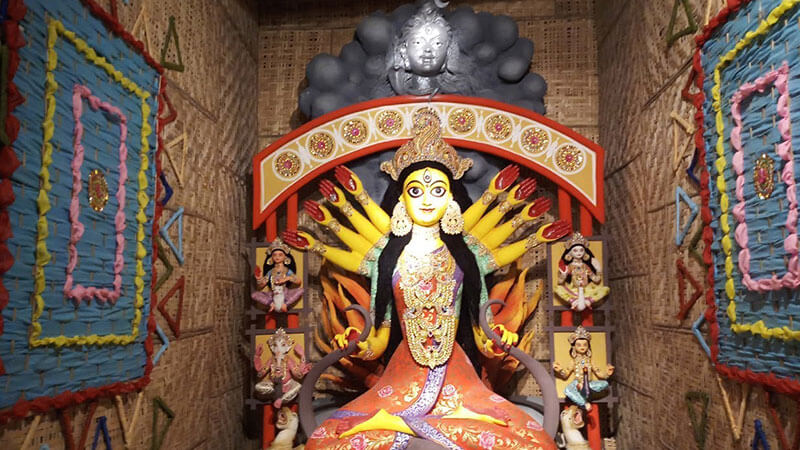 Started in 1913, Sikdar Bagan Sadharan Durga Puja is the oldest Durga Puja in Kolkata. The Sikdar Bagan Sadharan Durga Puja Pandal offers century-old tradition, rich cultural ambience and most spiritual environment. The specialty of this pandal in Kolkata is the pratima of goddess Durga, which is skillfully and creatively designed to create a vibrant atmosphere during the festival. Due to a shortage of space, The Pandal Samity tries to keep the decorations simple because of the lack of space but with decorative lights and lively environment, it becomes a scene you cannot miss in Kolkata. 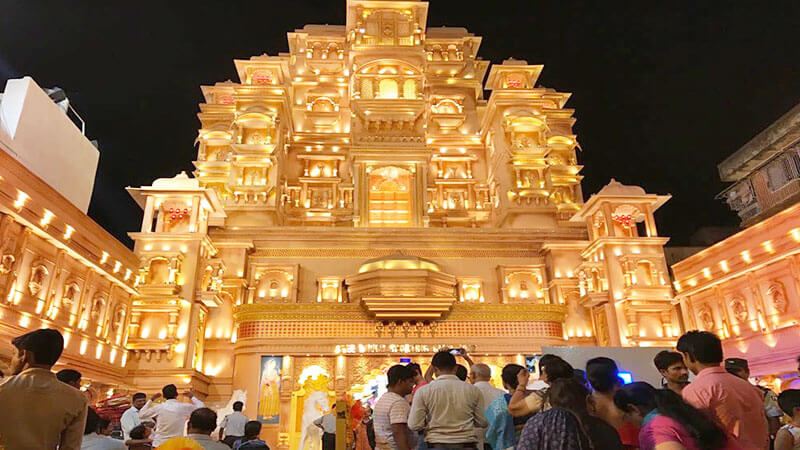 We all are true fans of Bahubali but, do you remember the palace of Mahishmati? Then, get ready as the durga puja pandal at Sree Bhumi Sporting Club, is going to create the almost the similar model of that huge palace. With lights, decoration and the perfect lively environment, the Pandal looks nothing but a sight to behold. Considered as one of the best Pandals in Kolkata, this Pandal in Kolkata attracts people from all the nearby places. 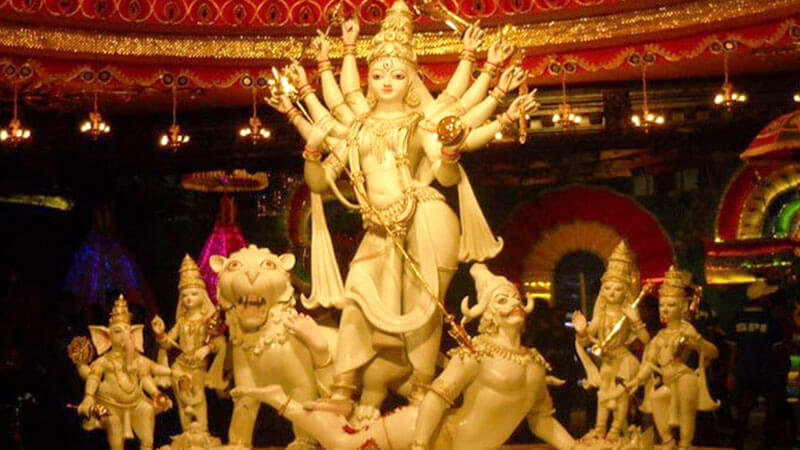 With its creative outdoor exhibit, themed in a different state of India every year, Suruchi Sangha Durga Pandal in Kolkata is one of the best places to visit in Kolkata during Durga Puja. This Puja Pandal is more than 50 years old and became popular it won an award for the best-decorated Pandal in 2003. The artworks done by the Pandal samiti are wonderful with the vibrant lights and Durga Idols, modeled on how they look in various states of India. 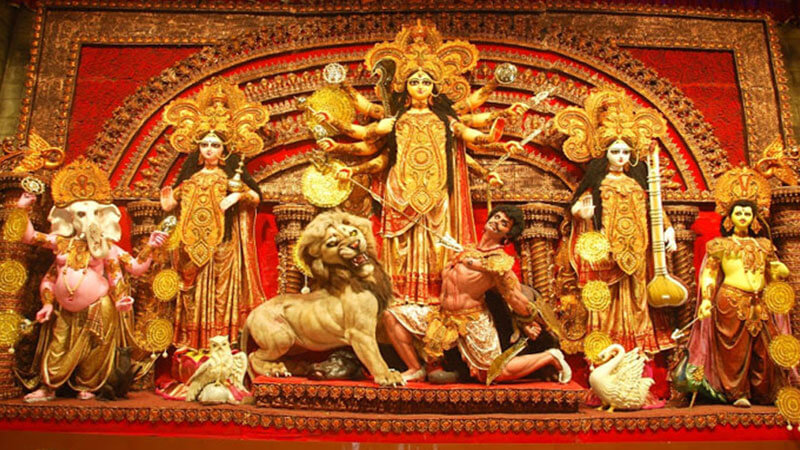 Different from other popular Durga puja pandals in Kolkata, the Lake Town Adhibasi Brinda Durga Pandal do not display big structures rather work their heart out to create themes like social awareness, current events, pilgrimage and rural life with a diverse and traditional form of Goddess Durga. Bringing a total celebration feel, the event also organizes cultural programs like song, dance, and drama along with blood donation camps, health check-up, and providing financial help to the poor. 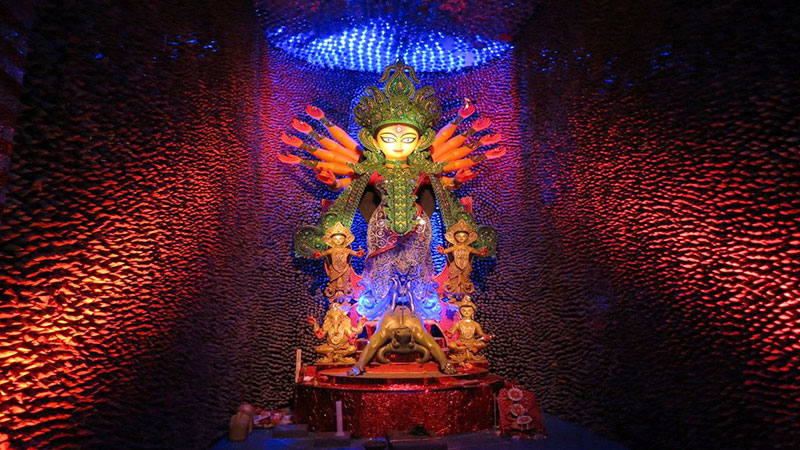 Every year Nalin Sarkar Durga Pandal displays the perfect mix of nature and heritage in Durga Puja. The Samity put all its efforts to make the Durga Puja event most amazing with the colourful ambience, creatively designed Pandal and the Goddess durga made up of pottery. Located close to other famous Durga Pujas in North Kolkata, the Nalin Sarkar Street Sarbojanin Durgatsab is a must-visit during the Durga Puja festival in Kolkata. 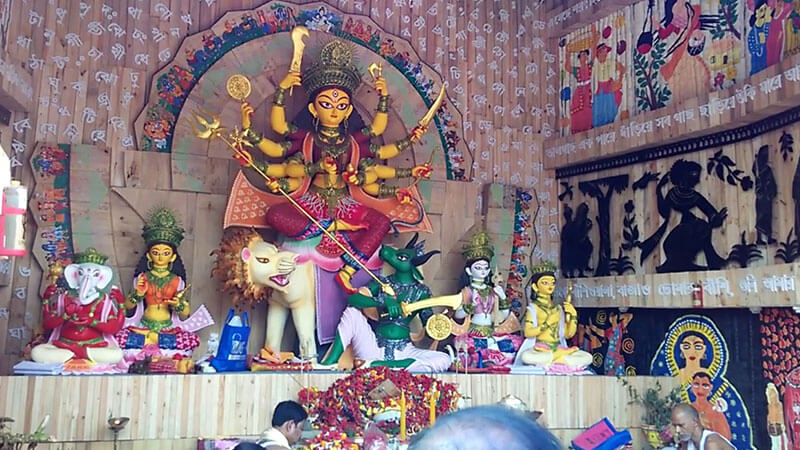 Started in the year 1943, this Durga Puja Pandal is very famous in Kolkata and has earned numerous awards for its unique set up and decorations. Seeing the growing demand to witness Durga Puja here, the samity over the years has put a lot of effort to maintain the tradition and creating a distinct environment during the Durga Puja festival in Kolkata. In the event you can enjoy Dhunuchi dance, Dhaki competition, and Sindoor khela, to experience the best moments of festivities. 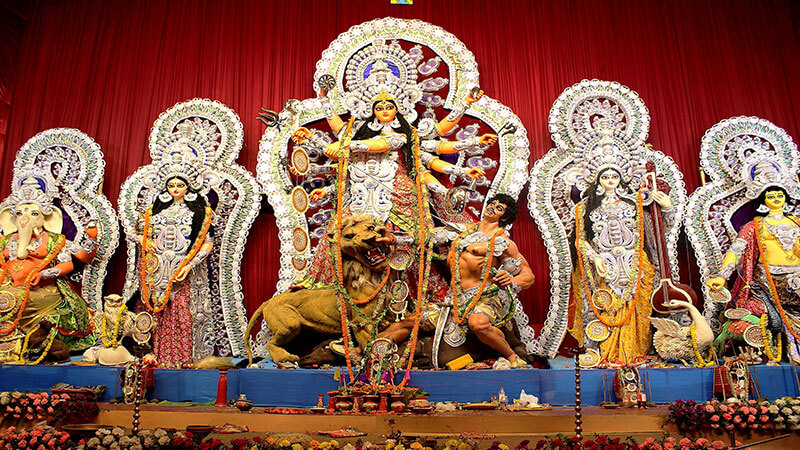 Started in the year 1943 and famous for its stunning replicas of various temples from across India, Ekdalia Evergreen Durga Puja Pandal in Kolkata is a must visit site in Kolkata. The most special aspect of Ekdalia Evergreen Club Durga Pandal in Kolkata is creating the tallest Durga idol in the city along with the age-old traditions and customs. The interior and exterior work of the Pandal with music and lightings simply brings up the most amazing festive mood in Kolkata. 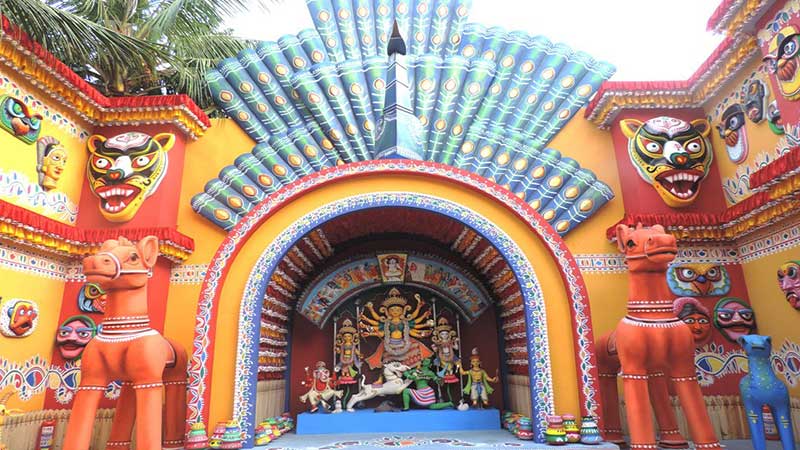 The Telengabagan Sarbajanin Durgatsab samity each year tries to bring the one impactful chapter of Indian culture through its intricately designed pandals, and diverse forms of goddess Durga formed creatively. They even have won several awards in various categories making it one of the must-visit pandals to visit in Kolkata. 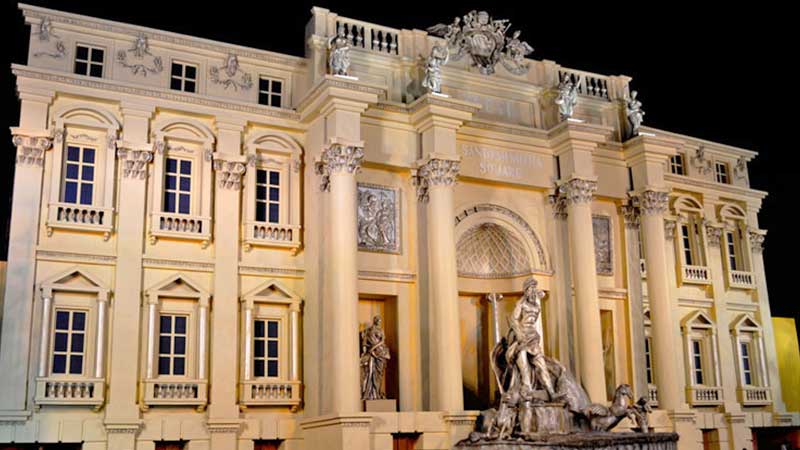 This place is one of the major and a very popular place to enjoy ceremonies during Durga Puja. It’s been more than 80 years now that Santosh Mitra Square has attracted a huge number of crowds from all over the world just to witness its grand celebrations. In 2017, this Durga Puja Pandal became very popular by building the structure based on London theme. The whole set up was so intricately designed and the Goddess Durga was seen in a Buckingham Palace like settings to give it a more authentic look. So, without thinking much, this festival season, don’t miss out to visit this amazingly beautiful Durga Pandal in Kolkata. 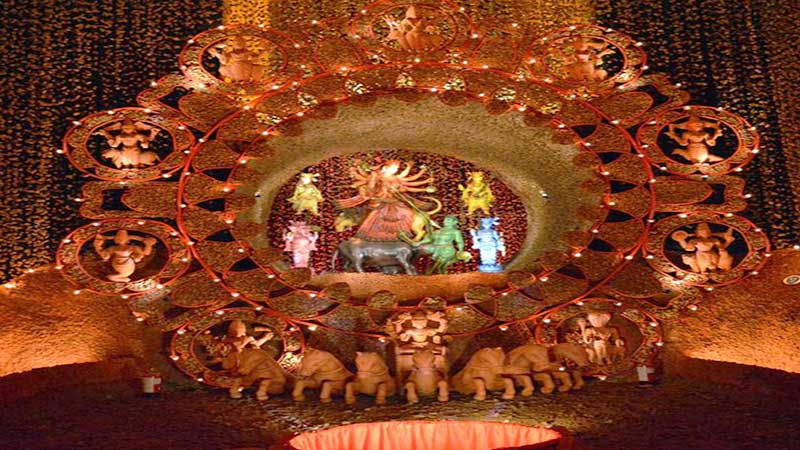 With more than 75 years of celebrating Durga Puja with great enthusiasm and fervour, Badamtala Ashar Sangha is one of the popular areas to get the blessings of Maa Durga. The place might not be that big and fancy but it still remains one of the biggest attractions during Durga Puja ceremonies in Kolkata. The pandal attracts huge crowd from all over the city to experience its charm in real. 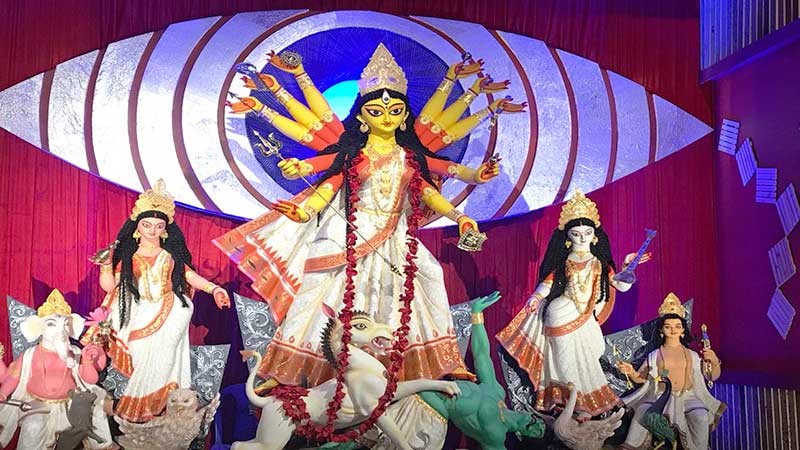 Known for its amazingly crafted Durga Puja Pandals in Kolkata, Samaj Sebi Sangha is one of the best places to enjoy the festivities. Situated on the Lake View Road in South Kolkata, the Sangha is popular for its traditional themes and incorporating social messages like women empowerment and right parenting in the Pandal interiors. Its style of architecture displays every aspect of traditional Indian culture and attracts huge crowds from varied parts of the city.

If you want to catch a good glimpse of these idols and the magnificence of the Pandal, we suggest you to plan your travel before. Book your cheap flights now to Kolkata and have an unforgettable experience around the festivities.