20 Types of Indian Railways: From Luxury to Mail!

One of the most commonly used public modes of transportation in India is trains. Trains are used by most of the population of India, from Luxury trains to Mail trains we have a bunch of exciting names for you today! So here is the list of all the trains that India runs!

Indian Railways is one of the most popular and busiest modes of transportation in India connecting numerous cities, towns, states, districts, and regions. In order to achieve this humongous feat, Indian Railways operates various types of trains that include high-speed, fully air-conditioned premium trains, point-to-point superfast trains, mountain railways (declared as UNESCO World Heritage Site), metro trains for fast urban transport, and even slow, cost-effective passenger trains, to name just a few. In this article, you are going to read different types of trains with names that operate in India. 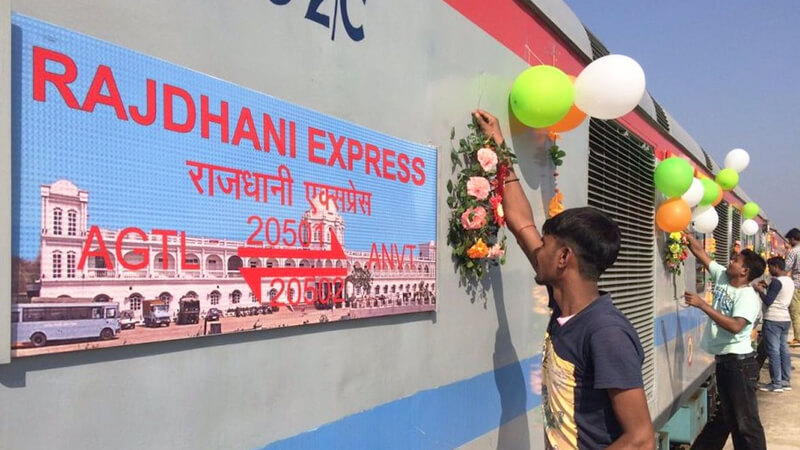 New Delhi to various locations, the Rajdhani Express train connects the national capital. Running at a speed of 130-140 km/hr, these are fully air-conditioned, high-speed, long-distance trains and have limited stops. As of now, 24 pairs of Rajdhani trains are operated by Indian Railways. Learn more about Rajdhani trains here. 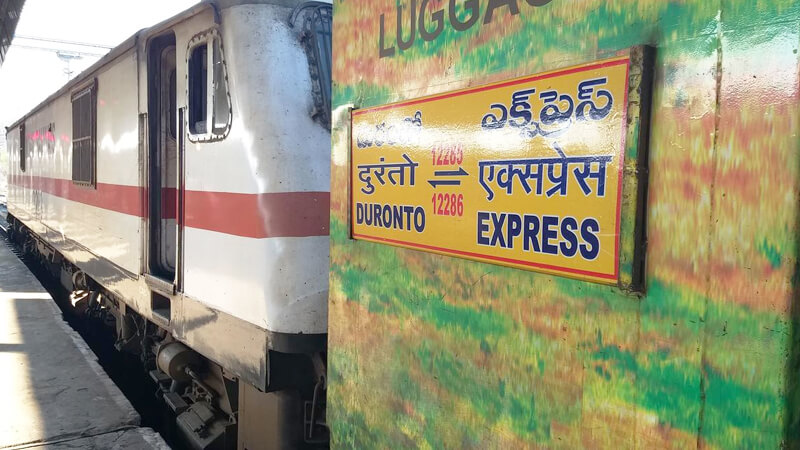 While some Duronto trains are fully air-conditioned, some run with non-air-conditioned sleeper-class as well. These trains have a speed limit of 130 km/hour and operate with fewer stops. Duronto Express trains are a premium category, long-distance, superfast trains that connect several state capitals and metro cities of India. As of today, 26 pairs of Duronto trains are running on India’s tracks. Learn more about Duronto Express trains here. 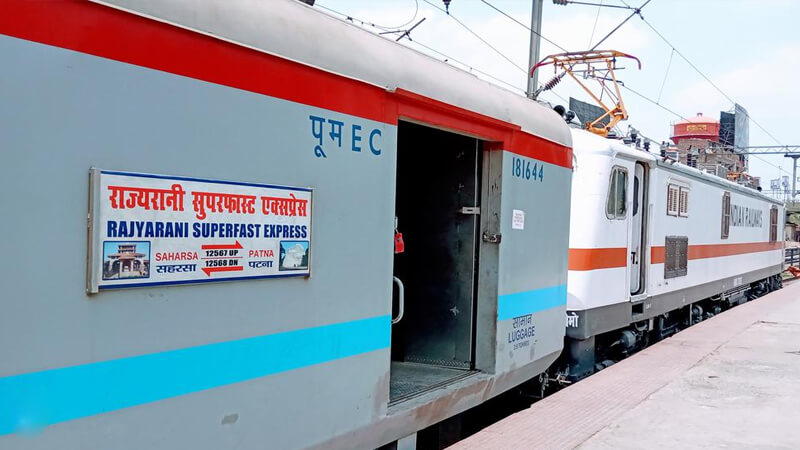 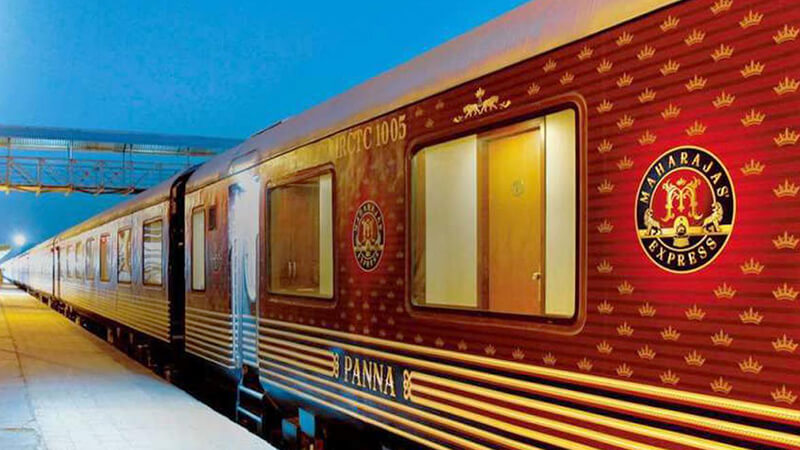 Palace on Wheels, Royal Rajasthan on Wheels, Maharajas’ Express, Deccan Odyssey, Golden Chariot, and Mahaparinirvan Express are some of the luxury trains operated by the Indian Railways. The Fairy Queen is a luxury train that runs from Delhi to Alwar. It is hauled by the oldest steam engine in the world, which makes it a tourist attraction in itself. Luxury trains are tourist trains that operate across various regions of the country. As part of this service, Indian Railways runs luxury tourist trains, Buddhist circuit special trains, semi-luxury trains, Aastha Circuit trains, Bharat Darshan trains, and steam trains. 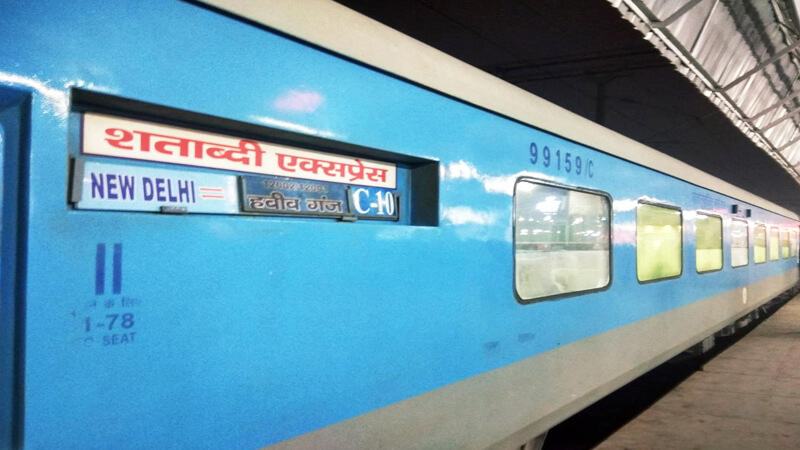 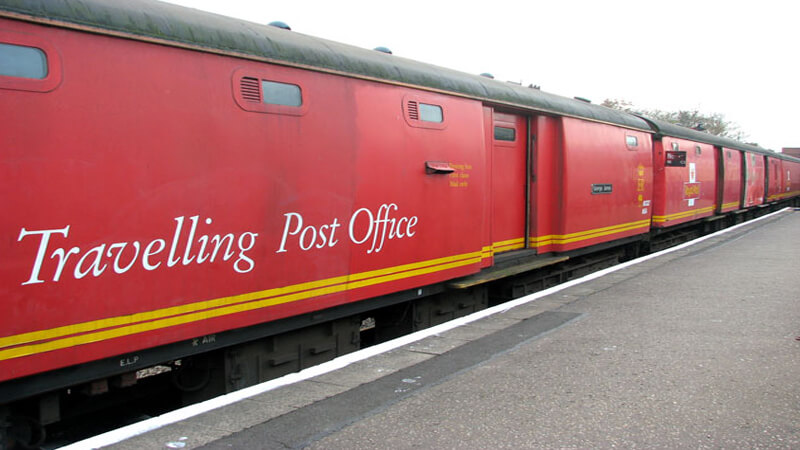 At present, all trains in India use their luggage coach to carry mails. Even mail trains follow the same policy, but the name remains in use. Although earlier, Mail Trains had exclusive coaches to carry mails, that is how they got their name. 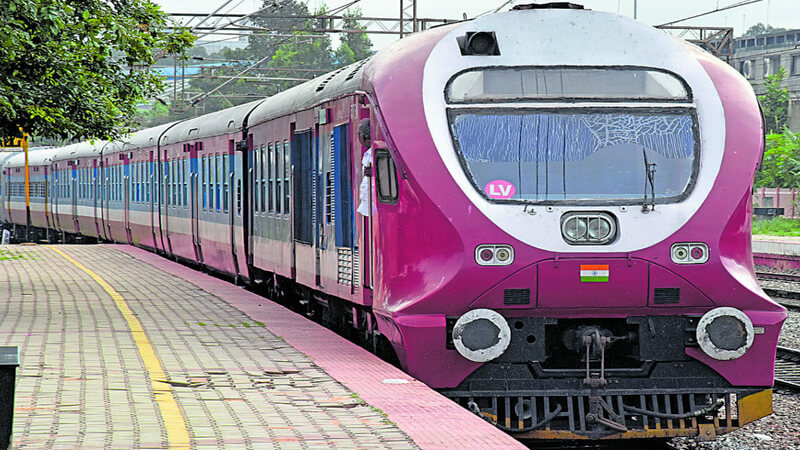 These trains generally have non-reserved seating arrangements and stop at every station on a route. Suburban trains or the local trains operate between a centrally located business district and the suburban areas. 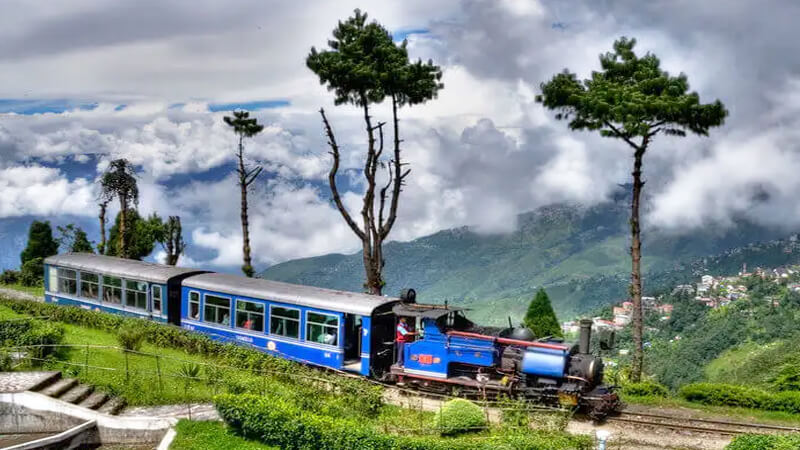 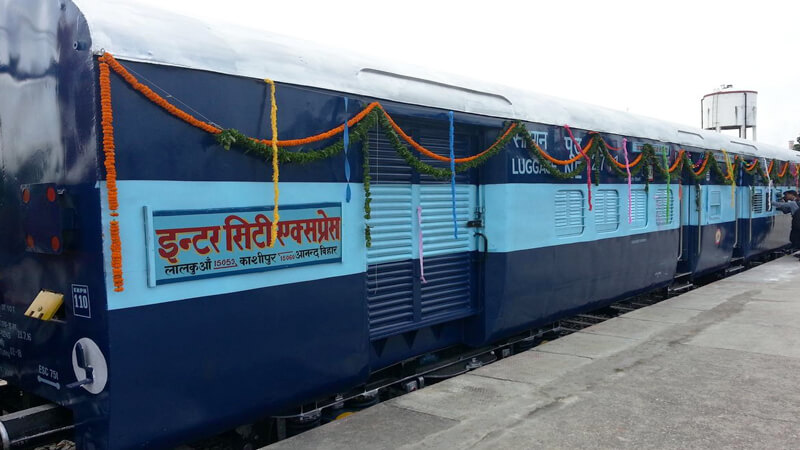 Intercity Trains are more affordable than other express trains and usually have only seats and no berths. They also serve to link the state capitals with prime railway junctions. These trains run on short routes with high or semi-high speed. 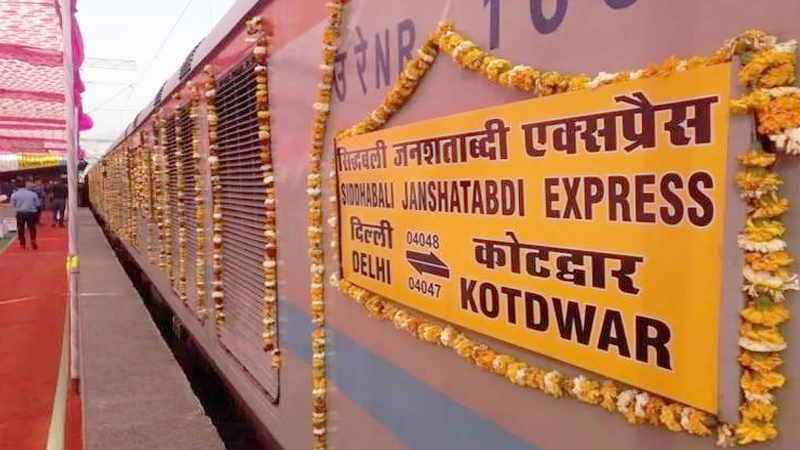 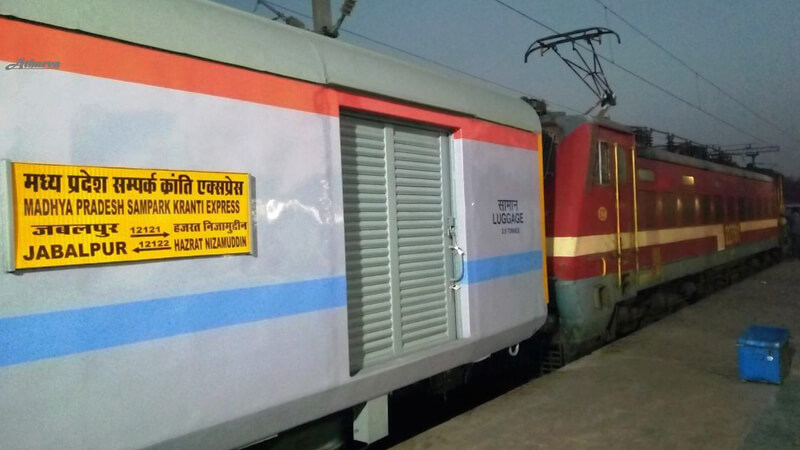 These trains operate at a maximum speed of 110 km/hr. Learn more about Sampark Kranti trains here. Sampark Kranti Expresses are superfast express trains that link the national capital, New Delhi with the state capitals or one of the important cities of a state. They are an inexpensive alternative to Rajdhani Express trains and offer high-speed travel at a low cost in both AC and Non-AC coaches. 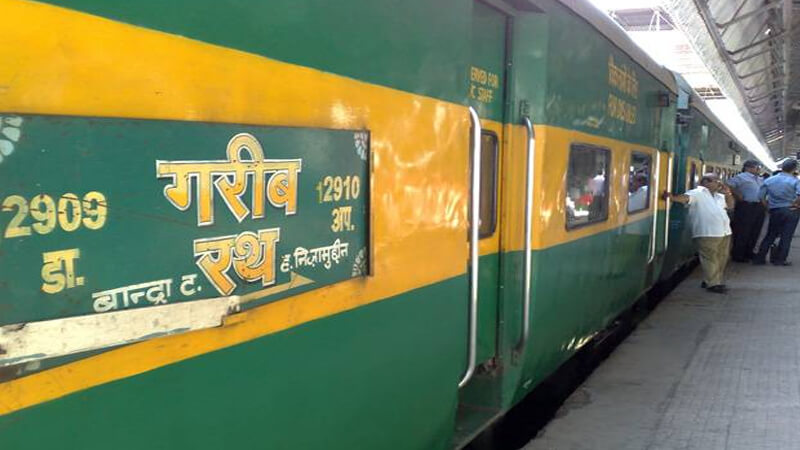 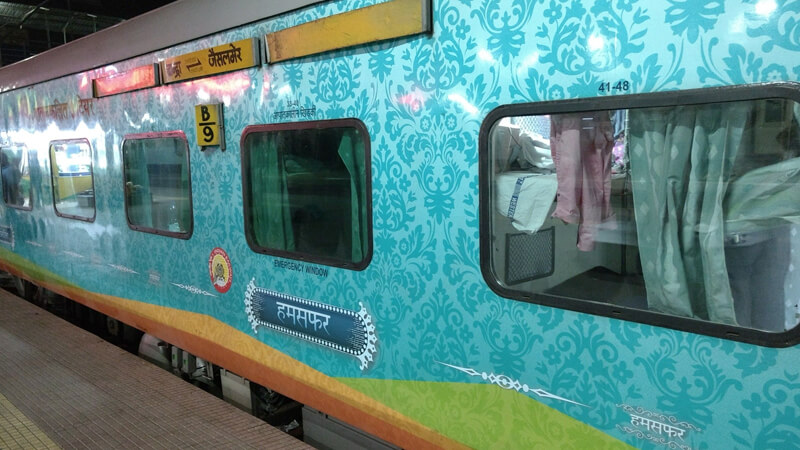 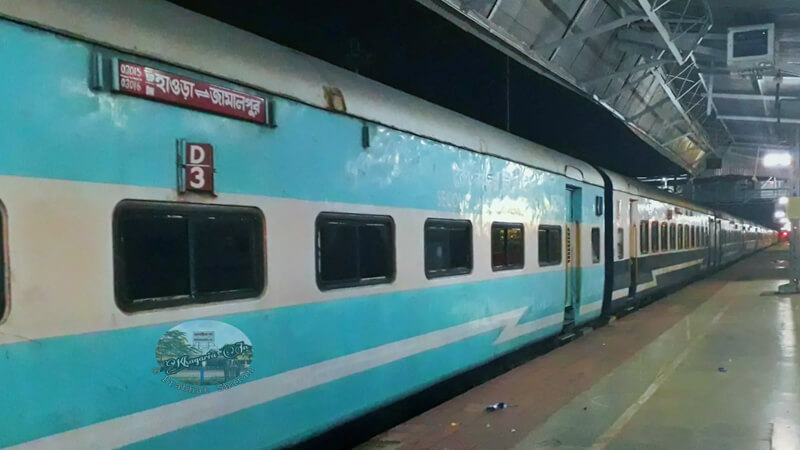 Out of the four pairs, Kavi is a superfast express train. Kavi Guru Express trains are a series of four pairs of trains launched in honor of Nobel laureate Rabindranath Tagore, who is referred to as Kavi Guru in Bengali. 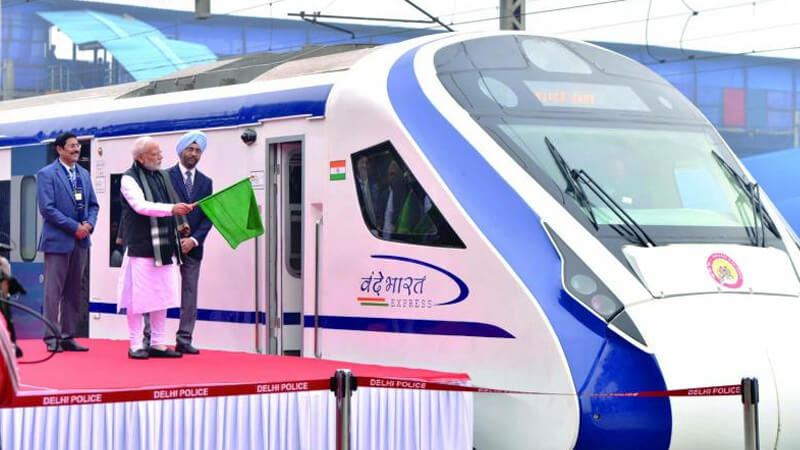 Vande Bharat Express is a fully air-conditioned, semi-high-speed, intercity day-train. It is also known as Train 18, this train offers various facilities, such as CCTV cameras, Wi-Fi, hydraulic-pressure doors, snack tables, and smoke/fire detection and extinguishing systems. It runs at a speed of 200 km/hr, making it one of the fastest trains in India. 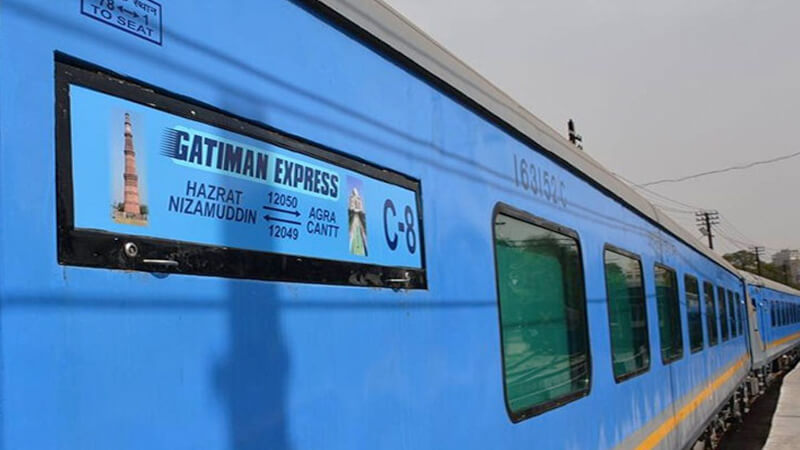 Running at a top speed of 160 km/hr, Gatimaan Express is the country’s first semi-high speed train that connects Jhansi to New Delhi. It is an air-conditioned chair car train equipped with various modern facilities like Wi-Fi, GPS-based passenger information system, fire alarms, sliding doors, and bio-toilets. It also has train hostesses to serve the passengers on-board. 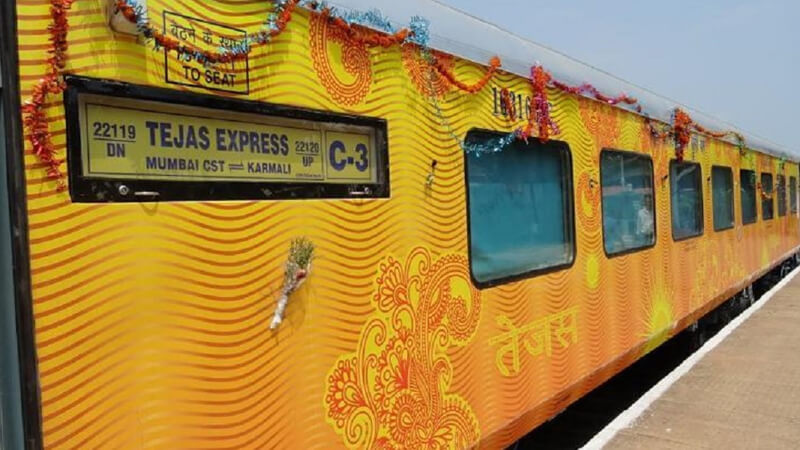 The Tejas express is a semi-highspeed train. It was launched on 24 May 2017 and is India's first-ever private train it is operated by the Indian Railway Catering and Tourism Corporation (IRCTC).

These trains are fully air-conditioned premium superfast trains. These remain on the priority list of the Indian Railway along with trains such as - Rajdhani Express, Shatabdi Express, Duronto Express, and more. It is considered one of the fastest Indian trains. The train can go up to the maximum speed of around 180 km/hr.

It comes with facilities like free snacks, beverages, an attendant call button, and more. 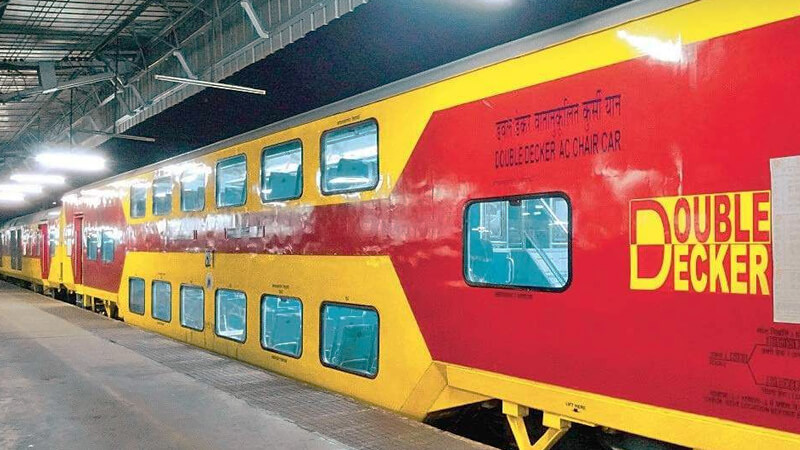 AC Express trains are completely air-conditioned trains that connect several major cities of the country. These passenger trains operate with high speed, limited stops, and offer lower travel rates in comparison to the premium trains. They can run at a maximum speed of 130 km/hr. 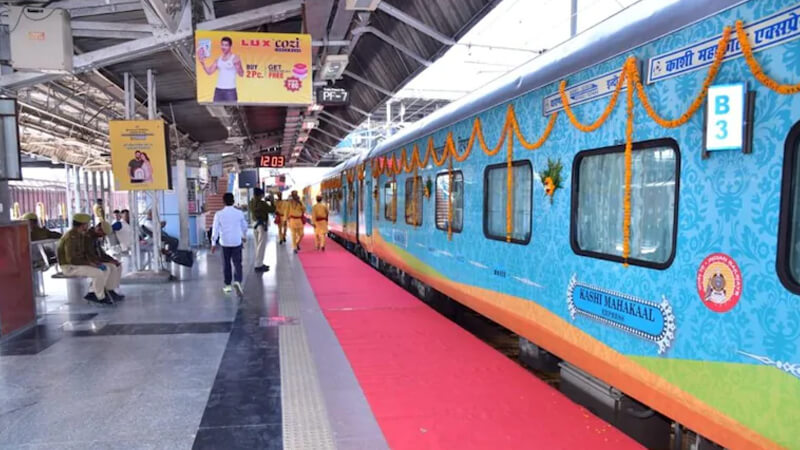 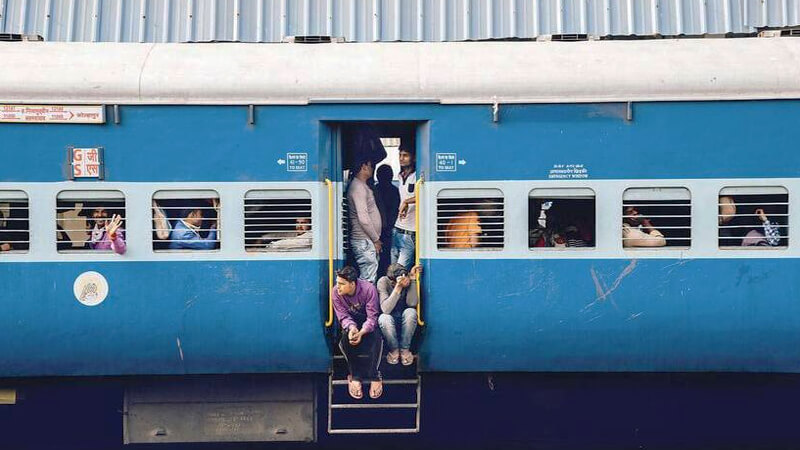 Classified as slow passenger trains and fast passenger trains, these trains provide economical travel options at slow speeds of about 40-80 km/hr. They often have non-reserved seating arrangements. These trains stop at almost every station on their route.

How did you like our list of the top 20 Trains that Indian Railway Runs? We are glad to present to you info blogs and articles. In case you want to enjoy a beautiful train trip, just book train tickets with EaseMyTrip and save huge on your bookings!